The illegal workers entered Thailand after traveling through natural passageways and are now in Toh Tah Phra Ya Area in Sa Kaeo Province. They were hiding in a local forest before 2 trucks picked them up. At 18.00 2 vehicles picked up the workers and their belongings. The trucks headed into a Eucalyptus Forest in Khao Hin Son, Phanom Sarakham District, Chachoengsao Province. The workers were dropped off in the forest and waited for another pickup. Investigation officials discovered the workers 13 men, 9 women, and a child, a total of 23 Khmers hiding in the forest.

The workers gave information to the police claiming that someone was coming to pick them up on the 9th at 8.00 where they would travel to employers. Officials waited around the forest but when the time came to pick the workers up. All 23 Khmers were arrested and delivered to the Khao Hin Son Police Station. The Sa Kaeo Provincial Public Health Office has been notified. The suspects will receive Covid-19 tests with plans to deport the workers back into Cambodia. Thailand is in a battle against Cambodians and Burmese smuggling into the Kingdom during the Covid-19 situation, there actions pose a serious threat against people living in Thailand.

FB Caption: Thailand is in a battle against Cambodians and Burmese smuggling into the Kingdom during the Covid-19 situation.

CH man with high fever runs away from hospital to nightclub. 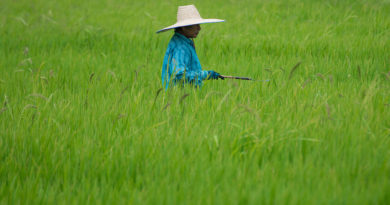