A Myanmar citizen was found sleeping at a bus stop in Nonthaburi Province. Police Lieutenant Colonel Thitiwat Chanukul and other related officials received notification from the JS100 Radio Station about a foreign man found sleeping at a bus stop. This was not just a normal homeless case as the Burmese was extremely sick with high fever and was not able to get up without help. The bus stop is located near Hongprayul Village across from the local Shell station at Bangplu intersection heading to Bang Bua Thong Market. Officials went to inspect the bus station right away in Nonthaburi on 14 July 2020.

The Burmese were still at the bus stop estimated to be around 40 years old. He was using a backpack as his pillow and seemed to be in deep sleep. Officials waked the man up and noticed right away that his sclera, the white part of the eye was very yellow. His skin was dry, the man had a sore throat, and could not walk on his own. Overall, it was clear that the man is extremely unwell and required immediate medical attention.

Officials notified the emergency medical line at 1669 to come help and inspect the man. The medical team determined that he had an extremely high fever, has Bradypnea which is when breathing is slower than usual and was showing signs of Bradycardia where the heart rate is too slow. Experts were called in and the man was delivered to a hospital. The results of the Covid-19 test has not yet been confirmed. This story is a high risk to the Covid-19 situation in Thailand, especially during current times concerning the case of Egyptian soldiers and the illegal entry of workers by the borders. The best measure to take is to carry on practicing safety regulations for your own health and your loved ones.

FB Caption: The man had yellow eyes, slow breathing, slow pulse, and wasn’t able to stand up on his own. 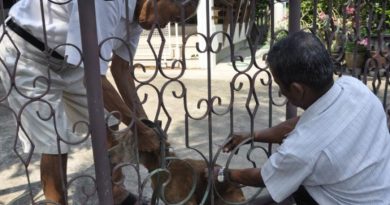