Police arrested 3 suspects, the driver of the boat, and 2 workers on the boat. The workers are Dej Tubtimmai 49-year-old and Wanchai Imsangtong 32-year-old. The boat is named Decho Cargo 89. The Navy officials received information from the Excise Department in Krabi Province on 21 June 2021. The information revealed that there are boats carrying illegal cigarettes from Krabi heading to other countries to move the cigarettes. The first country in destination is Indonesia.

The products were moved to 2 speed boats in the middle of the ocean in Trang Province. The boats would then head to an unknown pier. Officials tracked the group and found all suspects and products in Trang on 24 June 2021. Illegal tobacco product is considered a risk to the public health as there is no clear source of production or where the tobacco comes from. It reduces the annual tax revenue and can create a conflict regarding tobacco taxation. The World Health Organization (WHO) ranks the global tobacco epidemic as one of the main concerns of public health. As a result, political leaders have been encouraged to take serious actions to help control health issues related to tobacco use. As for Thailand, it is considered one of the countries in Southeast Asia with the strongest tobacco control laws.

FB Caption: The World Health Organization (WHO) ranks the global tobacco epidemic as one of the main concerns of public health. 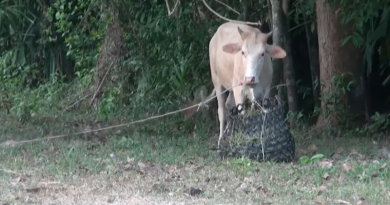 Songkhla on alert after rabies spreads to cattle