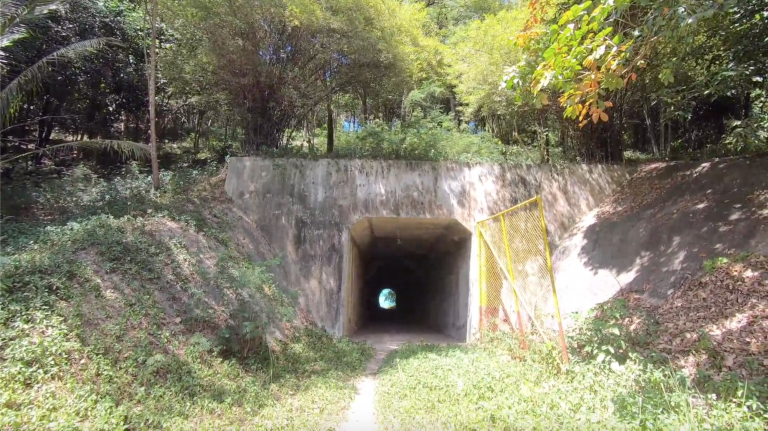 A tunnel was found in Koh Samui made from a strong metal structure with concrete and fence, the problem is that the tunnel cuts through a mountain to the beach which raised the question to who the owner is and do they have the rights to built such structure.\

On the 22nd of this month, the Mthai News Team were notified by a tourist that past through the area of a mysterious tunnel on the mountain of Koh Samui in Surat Thani province. The tourist was taking a hike on the mountains in Mae Nam district when they saw a large concrete tunnel with a metal fence blocking the entrance into the tunnel. Further inspection showed that the tunnel leads directly onto the beach.

The question remains for officials responsible in the area to search for whether the land has an owner or who the owner is, who built the tunnel, and what is the tunnel used for. The tunnel is a large concrete tunnel that involved planning, digging out the dirt, and construction of a very stable pathway from the mountain to the beach. Such tunnel is not an easy project and must have involved a construction team with many construction pieces of equipment used at the land through a certain period of time, it is surely not an overnight job that could’ve been hidden for long.

The tunnel is 3 x 3 meters with a length of over 100 meters with two entrances on the mountain and on the beach with a fence and a lock. The tunnel has an excellent position in the entrance on the beach along with an amazing view. The tunnel is also used to connect two areas that would’ve taken much longer by the original route to reach. Hopefully, all of our questions will be answered in the near future to what the true reason the tunnel is built for.

FB Caption: The tunnel couldn’t have been an overnight job nor could it have been hidden for long.