Officials discovered a boat full of illegal worker crossing the border illegally into Thailand. Suk Samran police and related officials arrested 30 suspects as they arrived in Thailand. The incident took place on 13 June 2022. The illegal workers are from Myanmar and were on the way to find jobs in provinces across the country. The workers were found on the boat as they were making their way onto land in Ranong Province. Officials received information from a source that there are illegal workers travelling in through the waters. Orders were given to inspect the area.

The information was confirmed as officials found a boat full of workers reaching land. Inside the boat were 30 workers with 23 men and 7 men. Officials also arrested a Thai man who was the person responsible for moving the workers. The man is Sermsak 26 years old from Ranong Province. The suspect admitted that this is his second time smuggling workers in from Myanmar. A man contacted him to pick up the workers and deliver them. The order was to hide them from police check points in exchange for pay. They will then be picked up by a truck that will deliver them to another location in Ranong.

The Myanmar suspects stated they traveled from Koh Song Province in Myanmar on the boat. They crossed the waters into Thailand and were residing at a location in Kapur Distict in Ranong for 3 days. They then got on another boat to travel to another location in the province but were arrested before they reached the destination. All of the suspects had to pay a fee to an agent in Myanmar who promised to move them into Thailand. The fee was set at 20,000 THB per person. As a result, they have all lost money and are now in trouble with the law in Thailand.

FB Caption: The workers paid 20,000 THB each to an agent with the promise to jobs in Thailand. 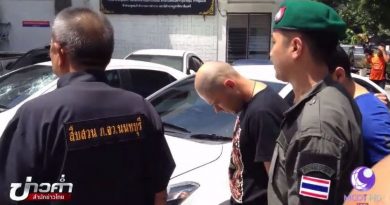 Chickens and Pigs go missing, turns out nieghbor is to blame. 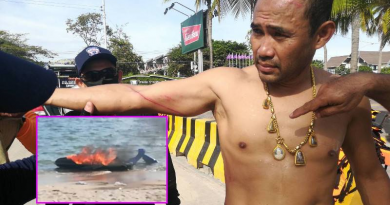