The Police have called in the owner of the amusement ride that malfunctioned and resulted in 4 injured children. The incident took place in Lopburi Province at a carnival named “Lopburi Winter” in Thai. Videos went viral showing the moment of the accident as children were on the ride having fun when suddenly the safety lock lets loose and the children bounced off while the machine was still spinning.

The machine was in full spin mode when the malfunction happened. When the safety lock mechanism sprung open the children fell onto the ground and some fell over the fence surrounding the ride onto the ground below. The parents and the people waiting in line to go on the ride all screamed in shock before rushing in to help the children.

The police were notified on 30 November 2019 at 22.30 of an accident that took place at a carnival festival in the main city of Lopburi. When the police arrived they found Sornchai 26 years old the staff that was controlling the ride at the time that the ride malfunction. There is no clear information on the statement that Sornchai gave to officials about what caused the safety lock to let go while the ride was going. Officials inspected the area and gathered the evidence before visiting the injured children who were sent to the Phra Narai Maharat Hospital.

There were 4 children in total who were injured including Tinporn Judee 12 years old, Noppasorn Buapoch 15 years old, Rujira Jittaket 15 years old, and Sirirrat Potima 13 years old. Officials had a meeting with the parents to hear their statements about the accident. The police are also searching for other evidence to use in the prosecution process to judge whether or not someone is responsible for the incident that took place.

FB Caption: The parents and the people waiting in line to go on the ride all screamed in shock before rushing in to help the children. 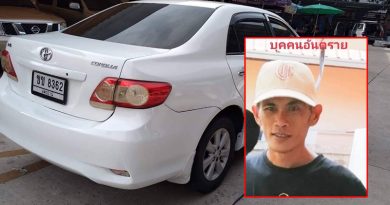 Man goes for a test drive and never returned.