44 Burmese were arrested crossing the border illegally into Thailand. The suspects were all crammed inside just 2 trucks. They paid 25,000 THB each for an agent to help find work and smuggle them across the border into Thailand. Police Captain Surachet Chumdam from the Border Patrol Police received notification on 18 December 2021 of illegal border crossing. Investigation revealed the suspects would be entering the Tha Sae District in Chumphon Province. Officials came up with a plan and waited near the local dam by both sides of the road.

They spotted 2 trucks driving near each other coming in from the Thai-Myanmar border area. The trucks were heading to the Santinimit Village. The police placed vehicles on the road to block both trucks. Officials presented themselves but when one of the drivers realized this was police they tried to back away. The team followed and finally the trucks were at a dead-end. The driver is Weerachat Luedwicha, 40 year old from Kanchanaburi Province. Police received information that the other driver is named Beer but he managed to get away in the dark.

Upon inspection police discovered that there were 44 Burmese crammed inside the 2 trucks. 24 are men and 20 are women. None of the suspects had documents that allowed them entrance into Thailand. Weerachat admitted that he was about to visit his wife in Surat Thani Province. As he arrived at the Bang Saphan Yai District, Weerachat received a phone call from Beer. Beer wanted to hire Weerachat to help move the Burmese workers from Ban Nuen 491 to PhetKasem Road where someone would be waiting to pick the workers up. They would then be delivered to the work locations as agreed. Weerachat did not arrive at the destination as he was arrested before arriving.

FB Caption: The Burmese workers paid 25,000 THB each to an agent promising to bring them into Thailand. 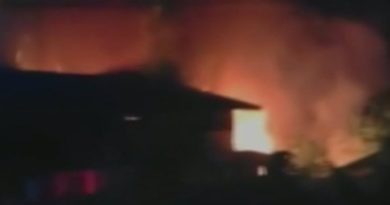