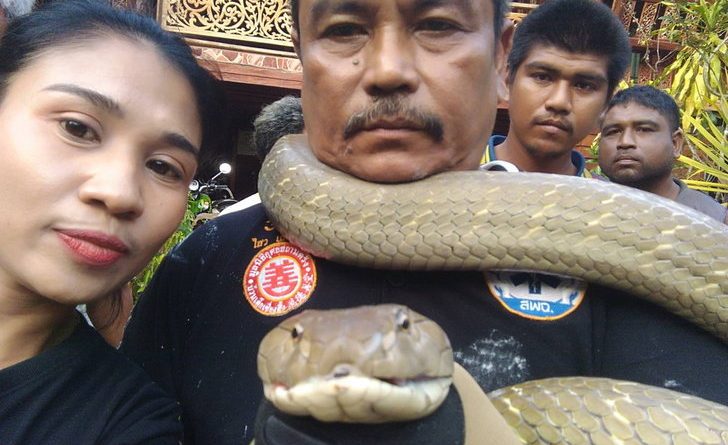 An elderly couple had a surprise visit from a 5-meter king cobra on 21 January 2020. The granny and grandpa live in the house no. 80, Wang Wiset District, Trang Province. Kij Jeenpracha 78 years old and Lap Jeenpracha 78 years old were having a normal dinner when an extremely long snake slithered close to the couple. It curled up by a pole in the middle of the house before deciding to take a gentle nap. The granny almost fainted and grandpa tried to stay calm as he called the police.

The police notified the local rescue team to come to catch the snake and release it back into nature, where it can continue its life. When the rescue team arrived the snake had changed its sleeping position to underneath the house on the ground. One of the officials who is a professional used his bare hands to grab the snake’s head. Other members then helped pull the snake out from underneath the house. The granny screamed in shock when she saw one of the men walk out with the snake around his neck and its head in his hand.

The couple and the villagers in the area believe that the large snake is a spirit of the land, a spirit of an old soul, or the spirit of a holy snake. Such large snakes are seen as special and are respected by the people. It is a practice to rub powder on the snake for luck and so that the spirit can go back to where they truly belong. The elderly couple and the villagers line up to rub powder on the snake as they make wishes for good luck, good health, and for the spirit to not visit them in the form of a snake anymore because it’s scary.

The granny stated that in almost 80 years old her life, she has never seen a snake this size before. The couple revealed that they tried praying to the snake and asked it to leave but it chose to stay. They then tried offering gifts in exchange but the snake remained strong in its position. The grandpa tried using a stick to poke the snake but it didn’t like that and started to hiss. Finally, they called 191 and the rescue team was sent to save the day. The men caught the snake with bare hands in less than 15 minutes. The snake was 5 meters long and weighed 20 kilograms.

FB Caption: The couple revealed that they tried praying to the snake and asked it to leave but it chose to stay. 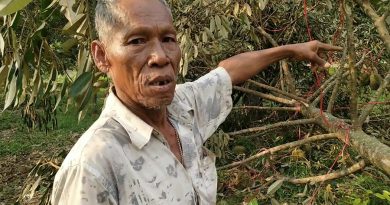