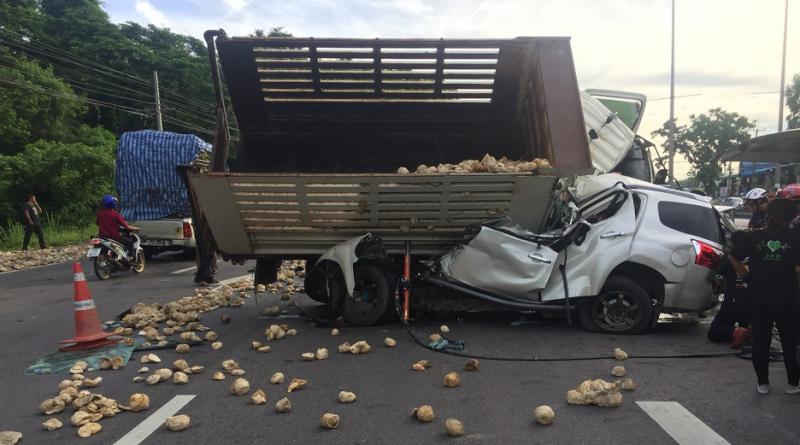 SEVEN people died on the spot after a 6-wheel truck carrying rubber pellets crossed to the other side of the road and hit a multi-purpose vehicle (MPV) with full force in Bang Saphan district of western Prachuab Kriri Khan province this morning (July 2, 2018), Thai News Agency reported.

Pol Lt-Col Nathapol Thapthim, duty investigator at Bang Saphan station, quickly dashed to the scene of the bad collision on Phetkasem Highway, between kilometers 386-387 and 300 meters before Wang Yao bridge, at 6.45 a.m. after alerting rescuers and the emergency unit at Bang Saphan Hospital.

There he found that the 6-wheel truck, registered in northeastern Surin province, had completely destroyed the Bangkok-registered MPV, killing all 6 persons traveling in it. The truck driver was also killed on the spot but a passenger traveling with him survived, and being injured, was rushed to the hospital.

Pol Lt-Col Nathapol initially found out that the 6-wheel truck, which was carrying a cargo of rubber pellets for delivery to the South, had tried to dodge a pickup truck that suddenly cut in front.

In doing so the truck driver lost control of the large vehicle which crossed over to the other side and forcefully crashed into the MPV, leading to the 7 of them dying. 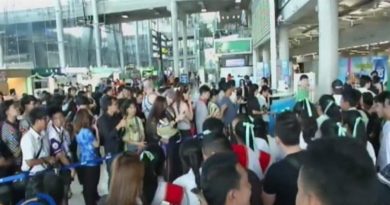