Chumporn – “They are here!” one birdwatcher shouts. “Four thousand Black Bazas from Siberia.”

The flock approaches as visitors at Khao Din Sor Bird Sanctuary scramble to see the yearly migration of wild birds.

There are more than 100 species that come to the hills here in Bangson Sub-district of Chumporn Province.

These Bazas, like the eagles, swallows, owls and other avian families have been coming here for centuries to escape freezing winters and starvation.

Hundreds of birdwatchers from around the world also converge at this “raptor sanctuary” for a glimpse of these beautiful creatures.

The Bazas are especially distinct with its spiked mane and striped chests.

They roam the hills of India, Asia Minor, Siberia and distant China before settling for good here, feeding on the worms and insects on the hills of Kha Din Sor.

The people of Bangson want to keep it that way.

Instinctively, they sense that once the forests here are cut like in so many parts of Thailand, another vital eco-system dies.

With the destruction of their ecology, the livelihood of the 1,200 families living in Bangson will also perish.

Working with the local community to retain their identity and to protect the habitat, one Thai food company is lending a hand.

Thai Union (TU), a leading seafood company, is trying to save Bangson as part of its contribution to social responsibility work.

TU is the country’s largest canned tuna producer. It aims to save a traditional settlement from the challenges that come with chaotic commercialization and industrialization.

It has seen what dangers have come to places like Krabi when coal-fired plants forced their way into degrading the environment for personal benefits.

“We have seen many cases where pristine beach and forest are destroyed,” says a top TU executive.

In Chumporn, the threat comes more from the tourism industry than heavy and light manufacturing.

The fact is the country does not really need another Pattaya or another Samui, he adds.

“What they have done to Phuket is also a tragedy for conservationists.

“Many here believe the damage cannot be recovered once it is lost.

“It takes millenniums to create a thriving eco-system and less than 5 years to wipe it out as in the case of Pattaya, Phuket and Samui.”

For these places, it is too late to stage a rescue. But Chumporn has some chance if the people here start early and fend off the encroachment of big business and corrupt officials.

Mass tourism blinds many with false promises of riches, leading to over construction of hotels, malls and condominiums.

The 4,000 Bangson natives want to preserve the natural resources they depend for their existence.

Somchok Pantarat, 40, is the eldest of four children of a family that lives by Klong Bangson.

He says the community is now united to work together to form a unified front as they review plans to “develop” the area into “a new tourism attraction”.

At the Khao Din Sor hilltop observatory to marvel at the flocks arriving to berth on its forest, some plans call for a widening of the pathways.

No doubt big business would like to plunder its forest with restaurants, cable cars and hotels. Such measures are almost certain to spell disaster to this green reserve, one of the few that have escaped the plunder and corruption of private and public outfits.

Mass tourism and ecology simply do not mix. With noise, pollution, toxic fumes and waste, the birds will be forced to fly elsewhere. They will perish when they run out of sanctuaries.

And with the falling of trees, the food supply so precious to the flocks will also be destroyed.

For TU, the work is just beginning.

“Since coming here two years ago, we have gradually worked with the community to find ways to increase income and opportunities without causing damage to the hills and sea,” says one executive.

Small tugboats go out to sea with nets and hooks to capture fish, crabs and squid. Small catches are toss back as the fishermen realize they need to protect the breeding grounds in the bay.

“We are trying to retain the corals and mangrove, places where marine life have spawn their young for centuries,” says Somchok.

The group is open to ideas for eco-tourism, fostering plans that will draw visitors who appreciate nature and the need for conservation to sample its rich undersea culture and pristine islands that are free of human settlements and squatters.

An idea to use old buses as a platform for corals to latch on and grow is being floated.

They think divers will find such structures interesting.

Others say the most dangerous thing in eco-tourism is doing too much.

Just leave the corals alone, some say. Eco tourists prefer the seabed to be in their natural state.

But somewhere in the talk, good things may come from the move to protect and nurture this natural enclave.

Man will always be the greatest threat to the planet, having the capacity to make extinct entire species and contaminating continents and seas.

The people of Bangson are not naive. Five hotel resort projects are coming to the area.

It is only a matter of time before much of what they possess is eroded.

Neither central government nor provincial authorities have the might to withstand the forces of big business and powerful interests.

“We can only do our best to counter the bad things from coming here,” says Somchok. “Public participation will also help our efforts.”

A number of outside groups are already seeing an opportunity for land speculation.

It is important that the Bangson community makes its voice heard and their concerns known in a timely and constructive manner.

When the birds and fish are gone, the loss is not just those of the villagers but the Kingdom’s as a whole.

Second inset: The forested hills of Chumporn are one of the last ecological reserves for migratory birds. 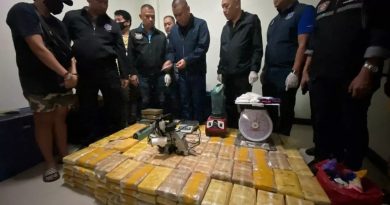 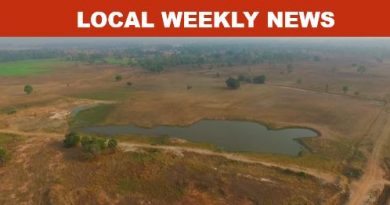