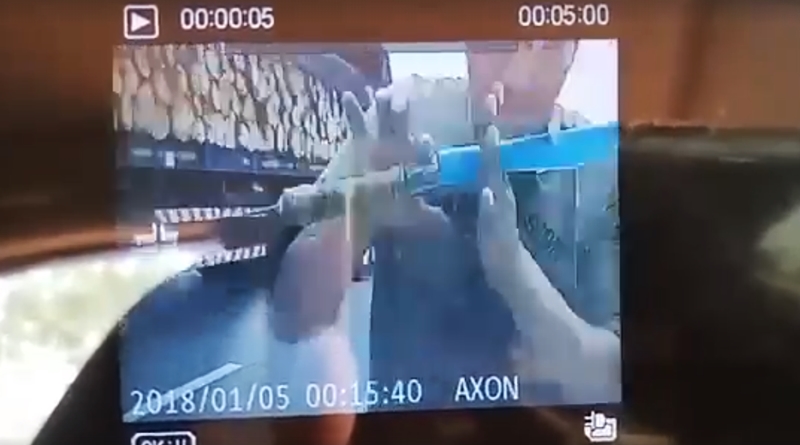 A video went viral amongst Thai netizens posted by Facebook User Suwan Lomduang. Luckily, Suwan had a security camera installed in his car that captured the moment. The incident took place on the 26th of this month when a beggar came knocking on Suwan’s car, the man was holding a knife asking Suwan for some money. Because the man was holding a knife, Suwan decided to not lower his window down or give the man any money.

This is when the man started acting up and jumped onto the car windshield. The car started moving but the man held onto the car and starting stabbing the window with his knife repeatedly. Suwan stated in his post, “Warning… I wish all of you live life carefully, always be conscious of what is happening around you, hopefully, more than me. Today (26 November 2019) I was on the road heading to see my best friend at his mother’s funeral and to visit my sister in Sakon Nakhon province.

I was in the car with my wife, and my 2 children. While driving on road No.22 (Sakon Nakorn – Udon Thani) about 300 meters away from the Kho Tai Subdistrict Administrative Organization a man was standing in the middle of the road, he was trying to stop cars that were driving. I had to stop the car when the man suddenly jumped in front of my car.

At first, he prayed to me, then he jumped onto the windshield of my car with a knife that was around 1 foot long. When he started stabbing the window I decided to continue driving, but the man held on tight. I couldn’t drive too crazy because there were other cars close to me. I kept honking my horn to alert the man but he let go of the car.

This was when I decided to find a safe location where someone can help me. I decided to drive into the Kho Tai Subdistrict Administration. I kept stopping and driving along the way and the man finally fell off inside the Administration. He continued to stab the driver’s window and the car door. While I was trying to drive away I heard him say “If I don’t get money, this is what you deserve”. I felt like he was on drugs more than the possibility of him being crazy.

I called the police and when they arrived with the rescue team what happened next reminded me of the movies. The man who was blocking the road in front of me disappeared into the forest nearby. A report has been filed at the Sawang Din Daeng Police Station.

Everyone in the car is safe, my wife is shocked with fever and my kids are still scared. This is my first car and it saved my life, if the windshield broke things would probably be much worse.”.

FB Caption: The man jumped on Suwan’s windshield and started stabbing the window with a foot long knife. 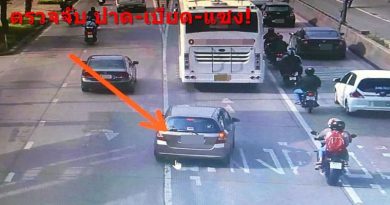