A car thief was caught driving the car he stole by the owner of the car. Officials from the Krathum Baen Police Station in Samut Sakhon Province arrested Not Jeankow 32 years old on 20 April 2020 at 15.00. Not is wanted with an arrest warrant issued by the Samut Sakhon Court on 20 April 2020 for Motor Vehicle theft.  The theft took place at 00.30 on the 19th inside a home parking lot in Krathum Baen, Not had also broken the nationwide curfew while stealing the car.

On the 18th, Not came in to see Karnika Raksakorn, the owner of a second-hand car tent. Not made Karnika believe that he was going to purchase a car, while she looked away the suspect grabbed the car keys and left the tent. The car keys were for a Bronze Toyota Altis with the license plate 9867. Then after midnight, Not returned to the tent and drove the car away. Later on the same day, officials received notifications that the car was spotted on the road but the suspect had escaped before the police arrived.

Officials kept an eye on the roads in the area as it was believed that Not would return. On the 20th Pisek Kaewpila 37 years old the son in law of Karnika drove around searching for the missing vehicle. Then someone called Pisek stating that the thief had entered a house to retrieve a phone. Pisek drove to the house, Not saw a car coming so he quickly drove away. Pisek notified the police that Not has been found and kept on following the suspect.

Pisek made a sudden decision to drive into the stolen car. Not attempted to run away in the crash but the officials arrived just in time and arrested the thief along with evidence being the stolen car that was now damaged. History shows that Not had previously stolen 2 motorbikes before selling the vehicles in Nong Khaem District, Bangkok.

FB Caption: The son-in-law caught the car thief, he decided to drive into the stolen car to stop the thief from driving away. 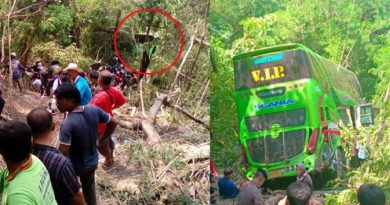