A dog had warned his human about an elephant attack. A man was attacked by a wild elephant in Chanthaburi Province at night on 13 September 2020. The Thai Bangkaew dog started barking non-stop so the owner decided to shine a flashlight to see what was going on. A wild elephant saw the man and started chasing the man using its tusks. The Khaosod News Team received notification on the 14th about a villager attacked by a big wild elephant. Luckily the man is not injured thanks to the dog that warned him of what was about to happen.

The incident was recorded on security footage. Jarat Promsawat 41 years old in Chanthaburi is an owner of a local fruit farm. At 23.57 Jarat heard his Bangkaew dog barking so he took a flashlight and walked to the front of his home. When he shined the light towards his garage there was an elephant as tall as his roof with tusks over a meter long. The elephant saw Jarat and started running towards him. Jarat stated that he ran for his life back into the home. The elephant was still angry and used its tusks to tear off clotheslines. The elephant stayed in front of the home for about 5 minutes before disappearing into the dark.

Jarat revealed that this is the first time seeing an elephant in the area. Jarat believes he is very lucky to have escaped the elephant. After the incident, he notified the village chief and officials in the area. Jarat wishes to warn other villagers to be very careful when exploring outside during the night as a wild elephant can come out of nowhere and not everyone is as lucky as Jarat. Inside the fruit farm are papaya trees, sugarcane, banana trees, and durian trees. Trees grown beside the home were all knocked down.

FB Caption: An elephant as tall as the roof was standing in front of the garage. 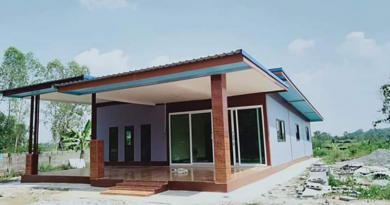 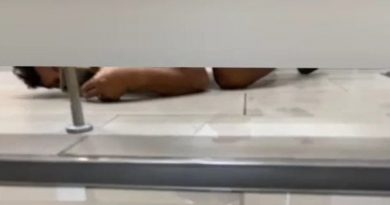