A fake monk has been arrested after he ripped off 1,809 THB of the taxi fare from a taxi driver. Kiatisak Subin 39 years old, the taxi driver came to file a report with the police on 21 April 2020. The driver explained that he picked up a monk with thick eyebrows and delivered him to Wat Pha Suk Maneejun Temple in Impact Muang Thong Thani, Nonthaburi Province. The monk told the driver while in the taxi that he was on the way to do some good for others in the temple. When they arrived, the monk got out of the vehicle and disappeared.

Officials from the Pakkred Police Station in Nonthaburi have arrested Daraswin Kambap 32 years old originally from Petchabun Province. The suspect was arrested in Ladprao 91, Bangkok on 24 April 2020 along with evidence including a monk robe, black notebook bag, sunglasses, and the fabric mask that he wore on the 21st. The suspect claims that he had entered monkhood in 2011 and left in 2017. He is currently unemployed and is staying at a relative’s home in Bangkok.

On the date of the incident, Daraswin claims that he didn’t intend to steal from the taxi driver. The driver took him to many temples, when they arrived at Wat Pha Suk the last temple the suspect went inside for a long time, and when he returned the taxi was already gone. The suspect had no choice but to call another taxi. It was a miscommunication and when the story went public Daraswin had the intention to come to give himself up to the police but was arrested before he had the chance to do so. The reason why he went to so many temples is to ask for money from monks he met while in monkhood. He has managed to get 200-300 THB from each monk.

The suspect wore a monk robe because he believed his monk friends would feel sorry and give him money. Sadly, the suspect has no money to pay for the taxi but stated that his relatives will take care of it. After the case is over he will be moving to another province. The suspect has apologized to the taxi driver who has forgiven Daraswin in exchange for a promise to never fake being a monk again.

FB Caption: Daraswin visited many temples to ask for money from monks that he knew, he managed to get 200-300 THB from each monk. 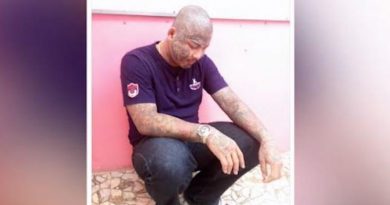 Fully-tattooed man not allowed to ordain 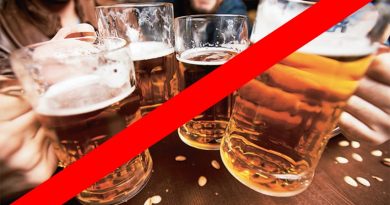