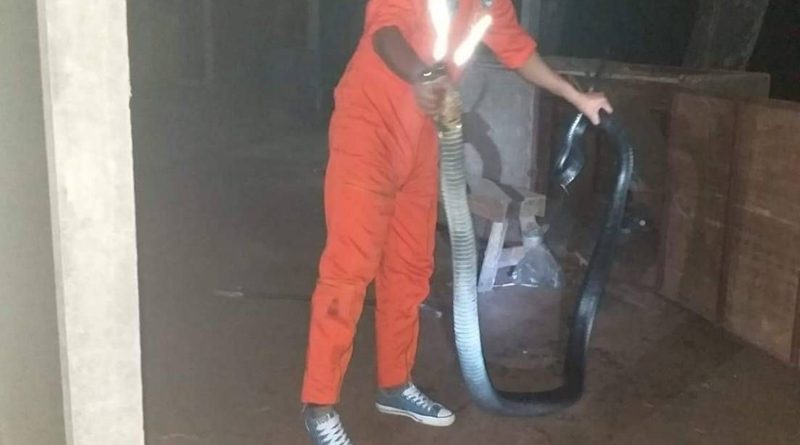 A giant king cobra measuring 4.5 meters long was caught by the local rescue team in Korat, Nakhon Ratchasima Province at 19.30 on 28 September 2019. The team was notified by some villagers that they saw a snake slither into the market. The rescue team contacted Sakaerat Environmental Research Station Sakaerat Biosphere Reserves before going to inspect the area. When they arrived, the snake was sleeping under a wood cabinet in the market under one of the stalls in the market. The rescue team and foreign animal experts slowly caught the snake. The market was a celebration that the locals have once per year in the district. It’s possible that the snake has gone hunting there before, but this time it wasn’t exactly what the snake was used to, filled with people, and lights. They had to be extremely careful as it was trying to slither away and kept on protecting itself. The snake thought that the people were trying to hurt it. After 20 minutes the giant king cobra was finally caught.

The snake had ticks on its head, indicating that it came out of the jungle to look for food. The king cobra was 4.50 meters long and weighed 6 kilograms.

The snake is now at the research station where both Thai and foreign experts will take care of the snake for about 5 days before releasing it back into nature. The experts will have to see what type of life this king cobra had before choosing the right location to release it. Normally, a snake will live nowhere further than 4 meters away from where it was found because snakes normally have a 4-kilometer hunting limit. If the snake is released in a strange environment then it would die within 2 weeks because it can’t manage to find any prey,