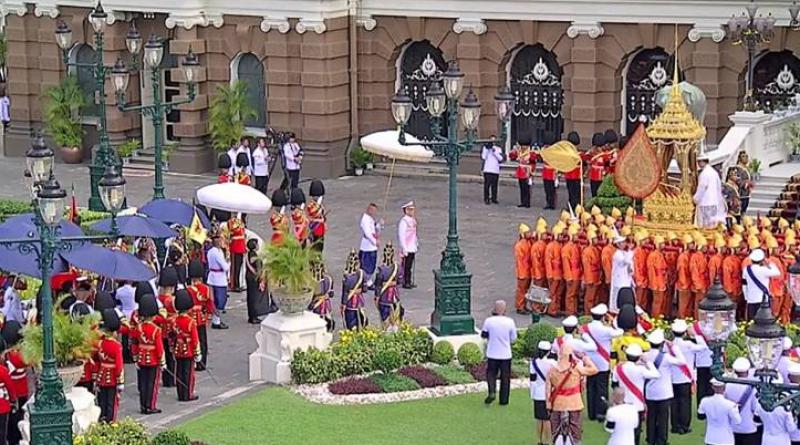 HIS Majesty King Maha Vajiralongkorn this morning (Oct. 29) performed a religious rite over the Royal Relics of His Majesty the late King Rama IX before transferring them to the Heavenly Abode in Chakri Maha Prasat Throne Hall, NNT reported.

At Dusit Maha Prasat Throne Hall in the Grand Palace, His Majesty the King first lit candles and joss sticks to pay his respects to the Royal Relics of His Majesty the late King Bhumibol Adulyadej as well as to the Buddha image of His late Majesty’s day of birth, situated on the Royal Throne under the Nine-Tiered White Umbrella of State.

Buddhist monks who chanted prayers on the previous day offered blessings to His Majesty the King. His Majesty then presented them with meals, followed by monastic offerings. Afterwards, the chief titled monk conducted a sermon. In response, His Majesty offered him and other participating monks saffron robes.

Another chapter of 89 monks, a number equating with the age of HM the late King when he passed away, took seats in the Throne Hall and chanted funeral prayers. At the end, they received saffron robes from His Majesty the King, gave him blessings and departed.

Inside Chakri Maha Prasat Throne Hall, His Majesty the King and the Royal Family held a private ceremony to pay homage to the Royal Relics and enshrined them in the Heavenly Abode, alongside the Royal Relics of ancestral kings.