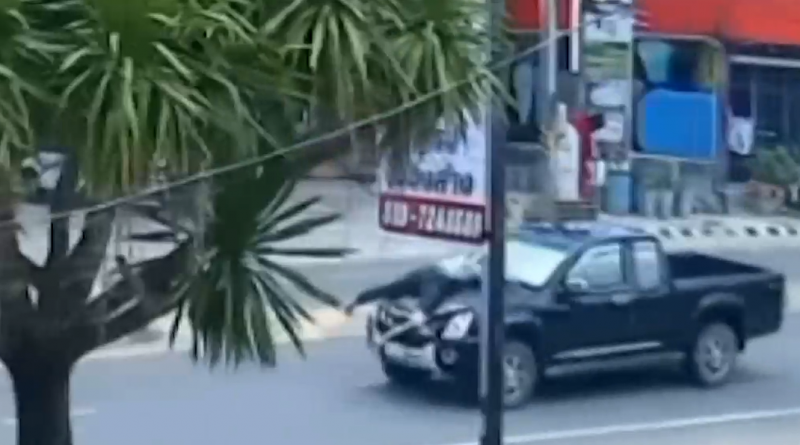 A husband discovered his wife was having an affair with a friend, he jumps onto her car and clings to the hood over a distance of over 100 kilometers. The man finally came off when police decided to shoot a car tire to stop the vehicle. Police Captain Swai Loenkaew from the Chumphon City Police Station received notification on 25 April 2022 of a couple’s argument incident. The husband jumped onto the wife’s car hood and wouldn’t let go. The wife started driving at a military stop heading towards Chumphon Province. Officials went to search for the vehicle in fear that someone will get injured.

They spotted a black truck with the wife driving and a 5 year old boy in the passenger seat. The husband was holding onto the hood and the windshield was broken in a wide area. The police tried to stop the vehicle but the driver did not listen. She continued driving and police followed, police had to be careful and calm the situation down as there was a child inside the car. The truck entered the city and avoided all stops with police. While she arrived at a local mall about 1 kilometer away from a dead end police decided to shoot a tire to stop the vehicle. The man held on as the truck drove across over 100 kilometers.

Police helped the man get down and delivered him to the Chumphon Hospital. While holding on the the hood he used one hand to continuously bang against the windshield. The woman and boy would not leave the vehicle but after an hour the driver finally opened the door. She was delivered to the Chumphon Police Station. Thawee 49 years old the husband found out Supha 48 years old the wife was having an affair with his friend. On the day of the incident they were at a funeral when she finally admitted to the affair. The husband told the wife he was going to crash the truck and kill them all. This is when she took the keys and their 5 year old niece to the truck. The husband sat behind the truck but as they arrived at the military stop he jumped onto the hood and held on. 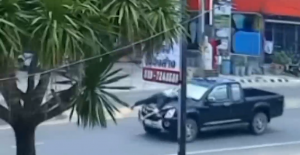 FB Caption: Police decided to shoot a tire to stop the vehicle while the wife drove towards a dead end. 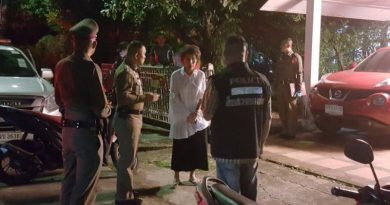 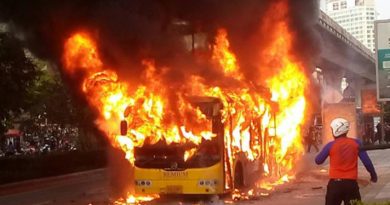