The Office of the Narcotics Control Board (ONCB) reported a result of the project “Airport Interdiction Task Force: AITF”. A Kenyan man was arrested after his attempt to smuggle cocaine into Thailand. He had swallowed 68 bags of cocaine or approximately 1,200 grams of cocaine.

Glenn Chivasello Ooko 43 years old from Kenya was arrested along with the evidence inside his body at Suvarnabhumi Airport. The arrest of Glenn led the police to another suspect named Osita Joseph Ukpa 40 years old from Nigeria, both of the men belong to the same drug group responsible for smuggling drugs into Thailand and countries in ASEAN.

An X-ray showed the bags of cocaine inside of Glenn’s stomach. The bags of cocaine are swallowed and then waited until they come out of the body, which is usually after already arriving in the destination country. This method of the drug trade is extremely dangerous as the bags can break while inside of the suspect’s body, causing an overdose that can escalate to death very quickly.

Police often use trained dogs to sniff out persons who have come in contact with drugs in the past few weeks. Another method is to test the luggage, clothes, and personal belongings of the individual to see if there are traces of drugs on the items by a special machine in airport security. This can help lead officials to have an idea who might be smuggling drugs in and out of the country.

Niyom Termsrisuk from the ONCB stated that the arrest is thanks to Prime Minister Prayut Chan-o-cha’s immediate order to protect and control the drug situation. Together officials are working hard following the policy to stop those who are smuggling drugs out of and into the country.

FB Caption: He swallowed 68 bags of cocaine or approximately 1.2 kilos of cocaine. 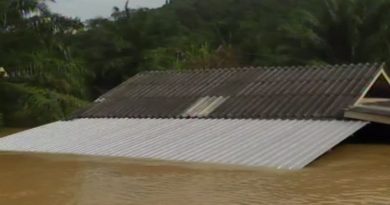