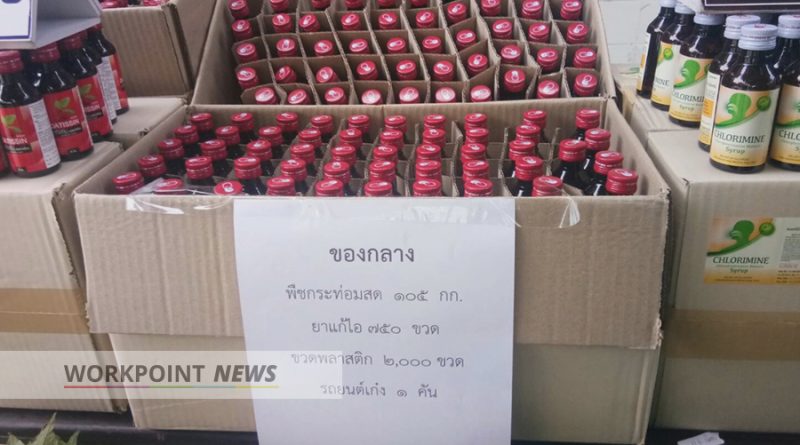 Captain Sathit Suwannaraj and other police officers went to search for a house that was discovered in the investigation to belong to the biggest seller of Kratom leaves in Songkhla. When the police arrived, Nattagan 33 years old came out and stated that he was the owner of the house.

When the police searched the house and discovered large piles of evidence against Nattagan’s crime, he tried to get out of the trouble by stating that he knew a big guy who was high up in the police field. The officials stated that the law cannot be violated and proceeded to search the house.

Inside the large bags were piles of Kratom leaves stacked on top of each other. Nattagan admitted that he buys the Kratom for about 300 THB per kilogram and then sells it to teenagers in the area for 350 to 400 THB per kilogram. The police then asked Nattagan to reveal what else what hidden inside the house.

Nattagan walked into his kitchen where 2,750 bottles of cough syrup were hidden adding to 28 large bags of Kratom leaves, coming to a total of 105 kilograms. The cough syrup and the Kratom amounts to about 300k THB worth of illegal goods.

Kratom has the scientific name of Mitragyna Speciosa belonging to the Rubiaceae family. The Kratom tree is about 10 to 15 meters tall when fully grown. Inside the leaves is a chemical named Mitragynine, a CNS depressant. The Kratom is considered to have similar effects as LSD and the famous horse pills in Thailand.

FB Caption: 105 kilograms of Kratom leaves were discovered along with 2,750 bottles of cough syrup.

e-juice seized worth over 2M THB.