A man escaped from a truck shortly before it went into flames. The man noticed a burning smell so he quickly parked the vehicle before calling for help. Police Lieutenant Colonel Somchai Rattanawichai from the Chaiyaphum City Police Station received notification of a vehicle on fire on road no.202 Chaiyaphum-Buayai (Niwetrat) heading into the main city of Chaiyaphum. The local fire station was notified along with related officials. The owner recently had a new sound system installed in the truck, this may be the main cause of the fire.

Officials arrived to find a Mazda truck with a Bangkok license plate on fire. With teamwork, the team was able to put out the fire in less than 15 minutes. The driver and owner Suradej Bunset 27-year-old from Chaiyaphum Province were in shock even after the fire calmed down. Suradej stated he was driving from Ponthong Village to the main city of Chaiyaphum. He noticed a burning smell coming from the front and then smoke started coming out. He didn’t feel safe and decided to park the vehicle by the road before calling for help from the officials.

A fire started before officials arrived. The team helped control the flames and luckily the car did not explode. The cause of fire has not been confirmed but Suridej had recently installed a new sound system inside the truck. He believes this might be one of the main causes. Officials estimated that the fire started from the battery. The driver was not injured in the incident as he managed to park and escape the vehicle in time. The truck has been moved to a car garage for repairs. Suridej has also filed a report with the police to investigate the true cause of the fire. 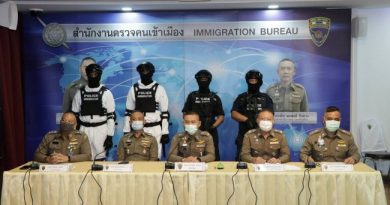 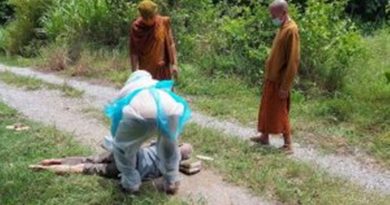