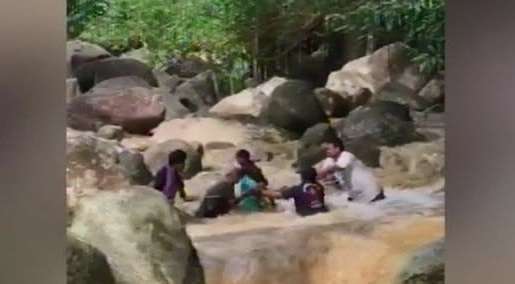 KOH Samui tourists watch in awe as firemen and volunteers rescued a man and his two small children stranded on a rock in the middle of a waterfall where raging rapids were rolling through after a heavy downpour, Thai News Agency said today (April 25).

Koh Samui municipality’s firemen were alerted of the plight of the three of them at around 2 p.m. yesterday and rushed to Hin Lad waterfall with volunteers to rescue them.

At the waterfall they found the rapids raging fiercely after a heavy downpour on the hills above it. The Thai man was carrying his three-year-old son and firmly holding the hand of his five-year-old daughter on a rock in the middle of the waterfall.

The rescue team tied ropes on trees on both sides of the waterfall and then moved in a row to the rock and first brought the five-year-old girl safely to the bank and after that the man and his three-year-old son.

The rescue team later said that it was lucky the three of them managed to climb on top a big rock because otherwise they could have been swept away by the rapids.

Top: The rescue team help the Thai man and his two small children get back to the bank. Photo: Thai News Agency 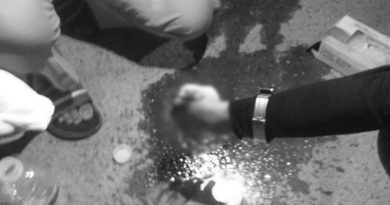 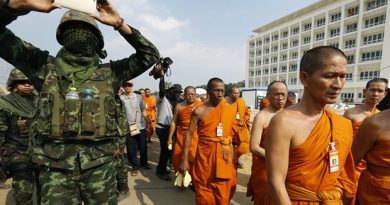