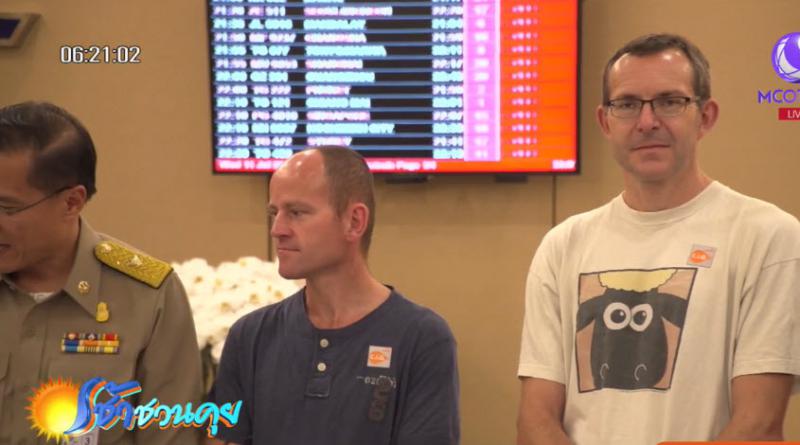 TWO ministers were on hand to say good bye to 2 hero British divers who were part of the team that successfully rescued 12 young soccer players and their coach from the huge Tham Luang cave as they caught a flight back home from Suvarnabhumi Airport last night, Thai News Agency reported this morning (July 12, 2018).

Present to receive them and bid good bye at Suvarnabhumi were Tourism Minister Weerasak Kowsurat and Transport Minister Arkhom Termpittayapaisith, who gave the hero divers some souvenirs.

Among them were a coin with the seal of the Prime Minister’s Office, a wooden box and a shirt made especially for this operation.

The 2 ministers also conveyed thanks from Prime Minister Prayut Chan-o-cha for their selfless sacrifice.

Volanthen said he has seen excellent cooperation among Thais and also between Thai Seals and the foreign divers.

He added that he is happy to have successfully completed this mission and confirmed he will return to Thailand when the weather is good for diving and also intends to explore this cave again.

He urged the rescued boys to not go into the cave during the rainy season again.

Mallison said he is very happy everyone is safe and urged the rescued boys to be more careful in future.

Weerasak said he thanked the 2 divers by saying in English: “Thank you million.”

Below:  The returning diving experts were given a sketch of themselves with the rescued boys. Photo: Thai News  Agency