A woman was robbed of her motorbike along with cash and other valuable goods 8 hours after purchasing the motorbike. The story was shared by Facebook user “พี้เสืออ กิ้งกือกระพรือปีก” who posted pictures of the brand new motorbike at 9.30 on 23 February 2020. The motorbike is so new it hasn’t even received the license plate. She had just bought the Yamaha-nmax motorbike when robbers used a knife to threaten her before driving away with all her possessions.

The victim is willing to give 5,000 THB to anyone that can help find her motorbike. INN News reported that the incident took place in Pathum Thani Province. The victim is Kamnung Praiwan 44 years old in Lat Lum Kaeo District. Kamnung stated that the incident took place at night around 20.40 on 21 February 2020 while she was heading to a nearby convenience store. As she was driving on a bridge two men driving a motorbike cornered her. The robbers used a Honda Wave motorbike and continued to honk the horn at her to stop.

While she was still driving one of the robbers wearing a black helmet jumped down with a knife aimed towards Kamnung. He then pulled out her motorbike key to stop her from driving away. The victim was shocked and asked what they were doing, they didn’t answer her. The robber with the knife jumped on her bike and both drove away, leaving her alone on the road. Kamnung revealed that her bag was still in the motorbike and inside was 9,000 THB cash, her truck key, home keys, and important government documents.

After the victim was abandoned on the road she decided to ask for help from fellow drivers. A father who was with his child at the time helped deliver her to the Pathumthani Police Station. The motorbike was bought at 13.00 on the same day of the incident so there was no license plate to help track down the stolen motorbike. 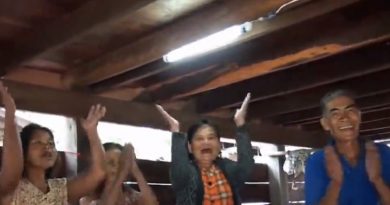 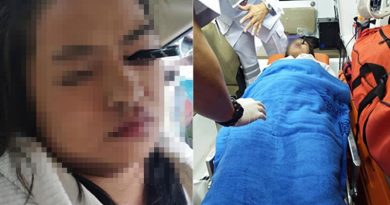