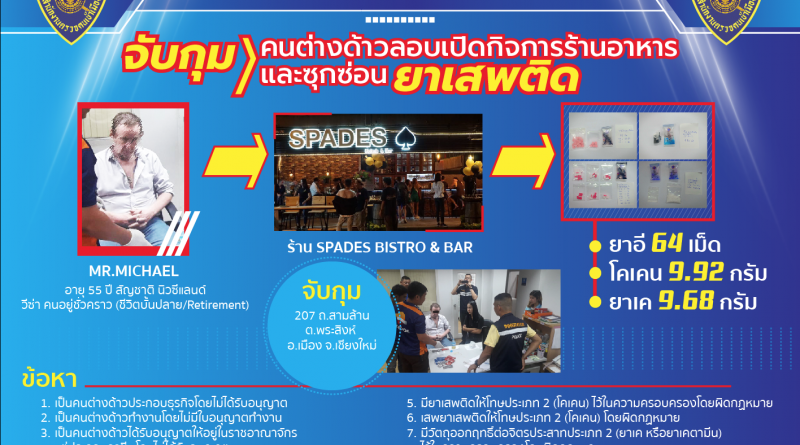 The Immigration Police arrested a man from New Zealand for owning an unregistered bar. A simple search in the bar and restaurant revealed the man’s hidden treasures, a handful of drugs.

Officials reported the arrest of Michael Garnet Eden Holt 55 years old. Michael has opened an unregistered restaurant and bar, this is illegal because there is a distribution of alcohol without proper registration. When the police went to inspect the suspect’s restaurant in Chiang Mai Province, they discovered a bigger shock. Michael is a drug user and had a handful of drugs with him at the restaurant including, 64 pills of Ecstasy, 9 grams of Cocaine, and 9 grams of Ketamine.

The Chiang Mai Immigration Police received information that the “Spades Bistro & Bar” in the City of Chiang Mai hired illegal foreign workers in the restaurant. When the police arrived, Michael was helping some customers. They asked to see his passport which stated that he traveled into Thailand on 11 July 2019 with a retired Visa. Furthermore, the restaurant documents stated that Michael was a shareholder at a company that owns the restaurant.

Officials then asked to see the security footage in the restaurant. Michael told them the cameras were not turned on as they belonged to the previous person who rented the building. The police didn’t believe him and decided to check the footage room on the second floor. Turns out, the cameras were truly turned off but instead, officials found ecstasy, cocaine, and ketamine along with 2 empty small ziplock bags.

Michael stated that he purchased the drugs for 45,000 THB from a foreign friend. The drug test (Urinalysis) revealed that he has been using drugs. The suspect was arrested and charged with working without permission and working without a working permit, possession of drugs with the intention to distribute, and use of drugs. Michael was then sent to the Chiang Mai Police Station for further prosecution.

After the arrest, officials went to Michaels’s house and found Pattira the homeowner who rented it out to the suspect. Inside were 14 drug paraphernalia items, this is equipment Michael used for the drugs. There was a golden tube with burnt ashes inside that seemed similar to burnt Opium. The evidence will be investigated further by the police.

FB Caption: Michael is a drug user and had a handful of drugs with him at the restaurant including, 64 pills of Ecstasy, 9 grams of Cocaine, and 9 grams of Ketamine. The police also found burnt ashes similar to burnt Opium in his house. 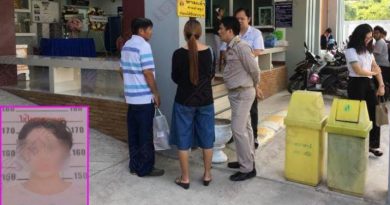 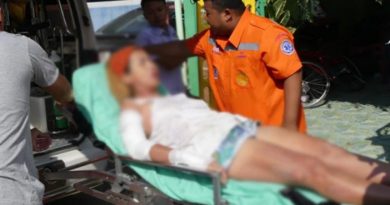