A newborn was found left in the forest wrapped in cloth, the baby was covered in blood and still had the umbilical cord. The mother was later found but she told officials of her strong intention to not keep the child as she is not yet ready to become a mother. The employer contacted police with information believing that one of his employees was the real mother. It was later discovered that the woman had given birth when she went to the bathroom and decided to leave the child without ever looking back, that was until someone found and saved the baby.

A villager was walking in the forest when she saw the baby wrapped in a white sweater. She slowly picked it up and saw the baby still covered with blood and had the umbilical cord still attached. The villager was shocked as this was in a forest and whoever did this must have wanted the newborn to disappear, as if the mother was never pregnant. The forest is located in Pak Chong District, Nakhon Ratchasima province. The good citizen notified the police and the local rescue team came right away. The baby is now safe in a local hospital.

Police Colonel Pichit Meesang from the Moosi Police Station reported on 18 May 2020 that an employer had contacted him. This employer heard about the newborn baby that was left in a forest on the news. Right away, the employer knew who the baby might’ve belonged to. Officials received information on the employee and gave her a visit at a home in Pak Chong. The 36-year-old woman acted normally when she saw who came to see her.

Officials invited the woman in for a talk at the station. The woman stated that she is divorced with 1 child. Her new husband is a 21-year-old boy. She forgot to take birth control and became pregnant with a 2nd child. The woman then got a job in Pak Chong with the employer who helped the police. On the 17th, she was looking after some Durian trees in the Moosi sub-district when she suddenly had to go to the bathroom, where she gave birth to the baby.

She used the white sweater that she was wearing and wrapped the baby before leaving it in the forest. Then when morning arrived there was news about an abandoned newborn. The woman clearly stated to the police that she is not willing to take care of the baby, because she is not ready to become a mother again. Officials have arrested the mother who is waiting for the prosecution at the Moosi Police Station.

FB Caption: The woman won’t keep the newborn and states that she is not ready to become a mother again. 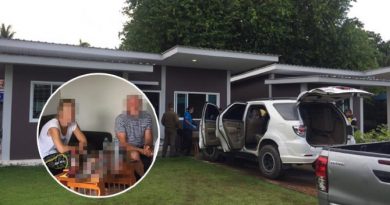 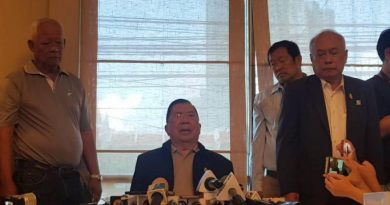