A newborn has gone missing right after birth. The mother has filed a report with the police in hopes of finding her baby, she saw the newborn for only 10 minutes. Police are shocked as this is a rare case where the parents are searching for their newborn missing for over 2 months. The hospital stated they didn’t receive the case when the parents went to pick their child up. Piyarat 37-year-old from Khon Kaen Province and Panya 29-year-old went to file a report with Police Captain Warapan Prasertsit at the Chonburi City Police Station. Piyarat the mother gave birth to a girl on 11 October 2020 at Hospital A.

The newborn had health issues that required transfer to Hospital B. The baby was delivered by Hospital’s A ambulance into the new hospital’s ICU. The parents remained in the first hospital and were able to see their baby for just 10 minutes before the transfer. A phone number 063-615-XXXX called the parents regularly to update on the baby’s health. Then on 2 December 2020 the number informed the parents that the newborn is now safe and ready for pick up. They traveled from Bang Lamung District to Hospital B. Hospital staff informed the parents that some documents were missing so the parents remained inside the hospital for days.

On the 4th the number could not be contacted so the parents contacted the Pediatric Building which informed them that the newborn was never transferred to Hospital B. The parents believe their child has gone missing and decided to ask help from the police. Hospital staff first stated that they needed to complete some paperwork, then they stated the child was never admitted. Piyarat saw her baby for only 10 minutes. The couple wishes to be reunited with their newborn who is also their first child. Police Lieutenant Colonel Chamnan Trinet from the Chonburi City Police Station reported officials are collecting evidence to find out the truth on the case. This is the first case of a newborn that went missing in a hospital since he has worked at the station.

FB Caption: Hospital B informed the parents that the newborn was never transferred to the hospital. 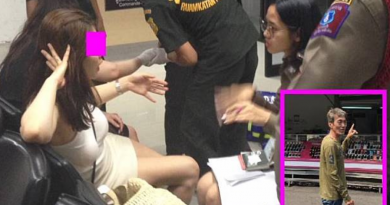