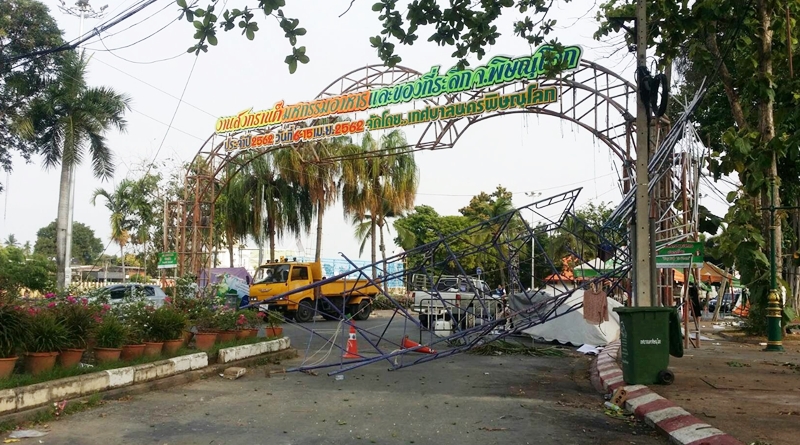 Hanp Phukjan from the Phitsanulok Department of Disaster Prevention and Mitigation reported on the 17th of this month to the INN News team about the Summer Storm that brought damage to the province. 7 districts were affected by the summer storm with a total of 105 houses damaged in 48 villages across 20 sub-districts.

The Bank Rakum district took the most damage from the summer storm with houses that have been totally destroyed. Luckily, there have been no deaths reported from all districts. The Governor of Phitsanulok had already ordered the local authorities to evaluate the damage caused in each village to further help the people recover from such an incident.

The province is ready to support villages and households that have been heavily affected by the summer storm. The amount of financial support will depend on the true damages that took place in each village.

The Provincial Electricity Authority in Phitsanulok is helping the locals in the area by repairing the electricity damage for safety and for further use. The rescue teams in the area have also given aid packages to the villages in all the affected districts in hopes to help make the healing process easier for the victims of the storm. The Phitsanulok Department of Disaster Prevention and Mitigation has reported that the province of Phitsanulok is still at risk of more summer storms. Locals in the area are advised to prepare for emergency plans and to keep track of the weather forecast for their areas. The government will be keeping a close watch to any signs of another summer storm in hopes of as little damage as possible.

FB Caption:  7 districts were affected by the summer storm with a total of 105 houses damaged in 48 villages across 20 sub-districts. 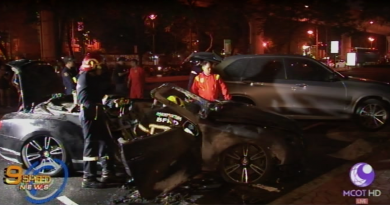 A Bentley supercar catches fire in the heart of the city