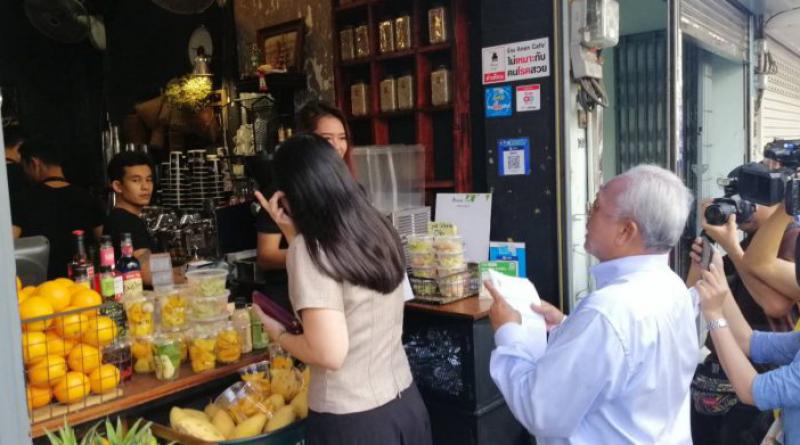 FORMER street protest leader and co-founder of Ruamphalang Prachachart Thai Party Suthep Thaugsuban took his caravan to meet the people from Silom to Narathiwat-Ratchanakarin road this morning (October 29, 2018) but some people did not welcome them, INN News reported.

After first paying respects to King Rama VI monument outside Lumpini Park, Mr Suthep and his caravan walked down Silom then turning into Soi Saladaeng, Soi Convent, Soi Pipat and Soi Lalai Sap and after that on to Narathiwat-Ratchanakarin road with the walk ending at Narathiwas – Sathorn skywalk (Chong Nonsi Bridge).

Just as he entered Silom a man followed them and asked whether this was Mr Suthep party. When confirmed that it was, this man yelled “liar,” and turned his back and walked away. Some shops refused to let the caravan enter saying they were not welcome.

However at Silom soi 5 and Soi Lalai Sap they got a good welcome.

Mr Suthep said his caravan has been walking around Bangkok for 3 days now and got a good welcome from Bangkokians especially in Yaowaraj area of the city on Saturday October 27.

However he added that some groups who want to return to power tried to disturb his campaign to invite people to join his party by both yelling abuses at them and posting them social media.

Nonetheless caravan participants were told not to pay any attention nor lose heart or respond because they were sincerely meeting people, he said.

Top and below: Suthep talking to shopkeepers and the press as his caravan goes down Silom area of Bangkok this morning. Photos: INN News