A couple has come out to the public for help on 19 January 2020 after their home was attacked with glass bottles from a neighbor’s house. Plean 49 years old and Bongkot 49 years old husband and wife from Buriram province are living in fear after a group of teenagers that were partying at their neighbor’s house attacked their home. The neighbor, in this case, is a teacher. Over 30 glass bottles were thrown, breaking their cabinet and light bulbs. They have also received threats of being shot and bombed.

The couple stated that on the night of 17 January 2020, Plean went to the neighbor’s house and saw the teacher drinking with a group of teenagers. Plean asked the teacher to please turn the music down because there are elders and people that are currently sick living in his house. The teacher continued to play loud music so the couple decided to call the Laharnsai Police.

Officials came to inspect the house and warned the people inside to lower their voice down. Shortly after the police left the couple’s house was attacked by a group of teenagers. Beer and soda glass bottles were thrown directly at their home. The couple believes that the teacher and the teenagers are displeased by how they were asked to lower the music sound. The teenagers also shouted “Do you want bullets or a bomb?” before leaving. This brought the couple fear so they decided to file a report with the Laharnsai Police.

Plean then stated that this wasn’t where it ended. The next night the teacher’s house had a loud party again. Then they were attacked with glass bottles for the second time. They told the couple to tell the police because they’re not scared. Plean called the police but they advised him to wait for the issue of a warrant. The couple doesn’t know what to do and has not left their house since. Plean reveals that his family wants to live peacefully, especially at night when their neighbor is partying with loud music and alcohol.

Sanook News reported that A, the teacher was called and asked about the incident. A stated that on the night of the 17th he was drinking with some grandchildren in his home. He went to bed early so he doesn’t know what happened afterward. A claim that the couple didn’t ask nicely but he didn’t throw any glass at their home.

FB Caption: The teenagers that were drinking with the teacher shouted “Do you want bullets or a bomb?” after throwing more than 30 glass bottles at their home. 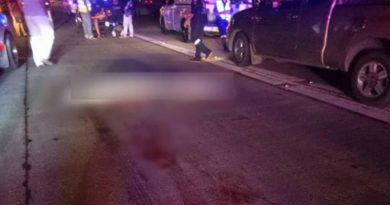