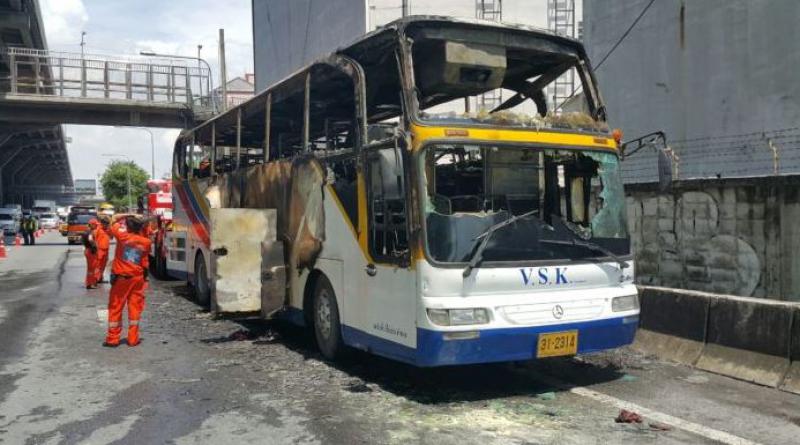 A MASSIVE traffic congestion occurred this afternoon (May 19) after a tour bus carrying Taiwanese tourists caught fire just 200 meters after entering the expressway at Sukhumvit soi 62, but fortunately all the tourists managed to safely escape from the blazing vehicle, the Thai-language daily Matichon reported.

At 1 p.m. today Pol Col Chatchai Chanthaphoon, duty officer at expressway level 1, rushed to Sukhumvit soi 62 toll gate where he saw that the blaze was quickly spreading upwards from the tour bus’ luggage compartment, with the satin curtains and leather seats helping spread it quickly.

The approximately 30 Taiwanese tourists quickly scrambled out of the bus, with some of them crying as they did so.

Rescuers and firemen managed to put out the blaze, but the toll gate had to be temporarily closed as they did so, and this led to a 2-kilometer long tailback stretching all the way to Bang Na.

On the expressway too there was a 2-kilometer long jam mainly because motorists slowed down to look at the burning bus.

Mr Phirapong Romphakdi, 43, the tour bus driver told police that he had picked up the tourists from NY Hotel in Samut Prakarn to take them to Chatuchak weekend market for shopping, and after cruising down Bang Na Trat Highway, got on the expressway at Sukhumvit soi 62 toll gate.

Soon after doing so he heard the tourists screaming, so he parked the bus to have look and saw the fire spreading quickly from the luggage compartment.

He contacted his company, YSK Transport, to take the tourists back to their hotel because they were shaken up by what happened and also losing their belongings.

Pol Col Chatchai said rescuers are quickly trying to move the bus from the expressway to ease the massive traffic jams, and as to the cause of the blaze, this will be determined by the forensic officials.

Top: The gutted tour bus after firemen and rescuers put out the fire. Photo: Matichon 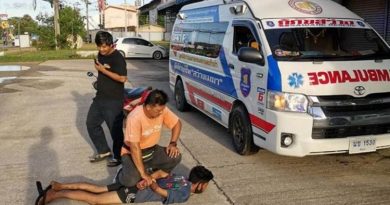