Hundreds of villagers surround a police car on 20 May 2020 in Surat Thani Province. A man claiming to be a police officer had arrested 3 fishermen before asking 5 Million THB in exchange for non-prosecution. The 191 radio station in Surat Thani received notification on the incident. Villagers did not approve of the officer asking for 5 Million and decided to take matters in their own hands.

Police Colonel Taksin Siripokpan from the Kanchanadit Police Station went to calm down the villagers. The officer arrived to find over 100 villagers surrounding a White Toyota Fortuner. Inside the vehicle were 3 men and the doors were locked. The officer talked to the villagers but nothing worked and they all insisted to stay around the car. Villagers stated that a man inside the car claimed to be a police officer. Arucha Binmusa 46 years old was arrested while he was purchasing baby cockles from local fishermen. The cockles were from the Tapi River. The so claimed officer pointed a gun at the men and seized 23 sacks of cockles weighing a total of 700 kilograms worth 500,000 THB while claiming that he was acting legally.

Anucha stated that he was arrested the day before but the old village chief negotiated with the officer and he was let go. Then he was arrested again in the incident. Anucha stated to the officer that he has permission to catch cockles. The officer wouldn’t accept his argument and demanded 5 Million THB in exchange to drop the case. It was later discovered that the officer is a policeman from the Provincial Police Region 8. Officers negotiated with the villagers, the villagers demanded to turn on the lights inside the car. After 3 hours they finally let the car drive away but some had broken the rear window.

FB Caption: The officer demanded 5 Million THB in exchange to drop the case. Over 100 villagers surrounded the car for 3 hours. 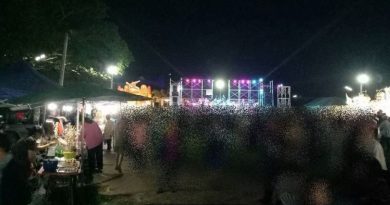 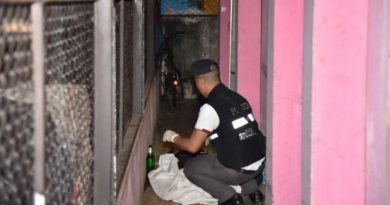