A woman was driving her motorbike as usual when she was trapped by a mysterious rope on the road. The rope ended up wrapping around her neck and cut 2 of her finger tendons. The wound on her neck is about 1 centimeter deep. The woman decided to chare her story as a warning. No matter how careful you are, anything can happen on the road at all times. The Facebook user shared her story to a Facebook page named “Jang Kaow Khu Mueang” in Thai on 31 January 2022. She wanted to warn other road users of her experience and believed she had just survived death.

The Khaosod News team went to visit the woman named Wasana Konkrue 28 year old from Buriram Province. The victim works as a factory worker at a brick factory in the province. Wasana stated that at 5 am her boss asked her to pick up some items for Chinese New Year. She left home on her motorbike and drove on the Khu Mueang-Puthaisong Road. This is a main road with 4 lanes. As she was driving a rope, which she believes is a nylon rope wrapped around her neck. It got tighter and tighter as she was still driving. Wasana was struggling to breath and tried to pull the rope off her neck.

She used her left hand to pull the rope and her right hand to slowly control her vehicle to park. Wasana was in pain both on her neck and fingers. She thought she was going to die. As she tried to remain calm the victim drove to her husband. The husband then took her to the hospital where they made sure she was safe. Wasana had a wound that is about 1 centimeter deep on her neck and 2 damaged finger tendons. The husband has filed a report with the Khu Mueang Police. Police went to inspect the road but the rope was no where to be found. 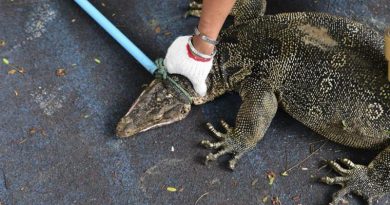