A man exchanged 30 baht of gold which is about 450 grams for a Musa Siam Ruby Plant priced at 1.2 Million THB. Pob Janpaibun 39-year-old who works at an insurance company exchanged gold items including a gold necklace, gold bracelet, gold and diamond bracelet, watch, and gold coins for a tree. This is not any normal tree but a Musa Siam Ruby Plant that comes with a high price tag in the current market. The buyer agreed to purchase the plant and placed down a deposit of 300,000 THB. The plant is from Avatar plant farm belonging to Narin 37 year old.

Pob agreed to purchase the tree in July 2021 and placed down the deposit. As promised, the man now has full ownership of the plant after handing over a tray of gold to the plant farm owner. Pob revealed he started researching information on the plant in the middle of 2021. He then contacted the Avatar farm asking for a beautiful Musa Siam Ruby Plant. After visiting the farm he saw the tree when it was only the size of a pinky finger. The buyer talked to his girlfriend and agreed to purchase the plant right away. Pob stated he knew it was going to be beautiful and already has other plants at home. Some plants he has include Musa Siam Ruby, Florida Banana Variegated Musa, Musa Gracilis, and more.

After placing the deposit down Pob stated his income has been growing. He believes this is a good luck tree that will help enhance luck in his life. He was the 8th highest insurance seller in the country in 2021 even though the Covid-19 situation continues. After agreeing to purchase the plant Pob asked the farm to take care of it for him until it was bigger. The family was building a new home during the time and wanted to bring the plant in after everything was complete. Pob visited the plant every month. The buyer further reveals this is the gold he has been collecting over a period of 10 years working at the insurance company. He also received some as a gift for completing sale goals.

FB Caption: Pob believes the tree has helped him get more sales at the insurance company. 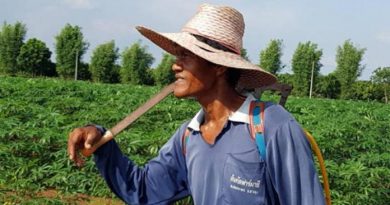