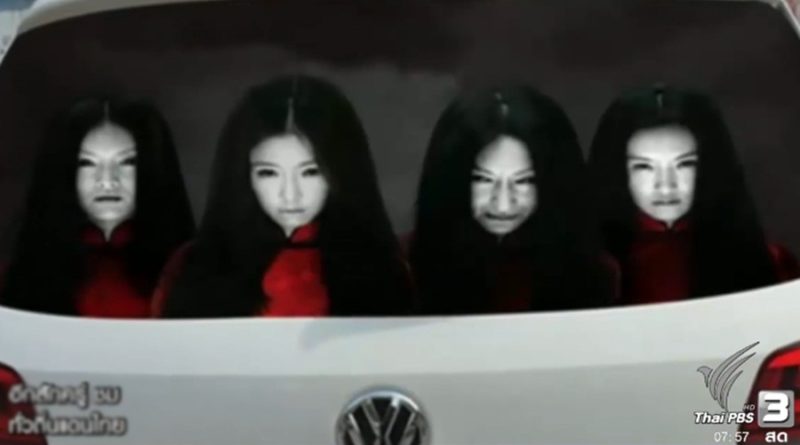 THE Land Transport Department has warned that motorists face a 2,000 baht fine if they paste ghost stickers on the back windows or rear bumpers of their vehicles, Thai PBS said today.

The warning came after creepy images of ghost stickers were posted on the social media and were widely shared.

Although the ghost stickers were not widely seen in this country, but prevalent in China, the action by the department was seen as timely and served as a preventive measure in case they are imported and used by motorists.

According to the director-general of the department, Sanit Phromwong, the ghost stickers could confuse motorists and affect concentration while driving.

The ghost inspired stickers could obscure sightings and could lead to serious car accidents if they pasted on the rear of the cars, he said.

Installing such creepy stickers violates Article 12 of the Automobile Act 1979, and the violator faces 2,000 baht fine, he added.

According to Shanghaiexpat.com, a selection of ghostly stickers designed to deter drivers from using high beam headlights are currently one of the best-selling items online in China.

The spooky stickers, which are currently selling for around ¥100, come with a range of “terrifying” images and are designed to cover a section of the car’s rear window. While almost impossible to see for drivers using their normal headlights, those using their high beams will get to see the ghostly images in all their glory.

The number of drivers using these stickers is apparently so high in Jinan City, Shandong, that local police were forced to issue a statement about.

“Use of these stickers can severely effect both drivers’ visibility and can shock and surprise those driving behind, potentially leading to accidents,” said a spokesman for the Jinan City Traffic Police.

Top: A creepy ghost sticker pasted on the rear of a car in China. Photo: Thai PBS