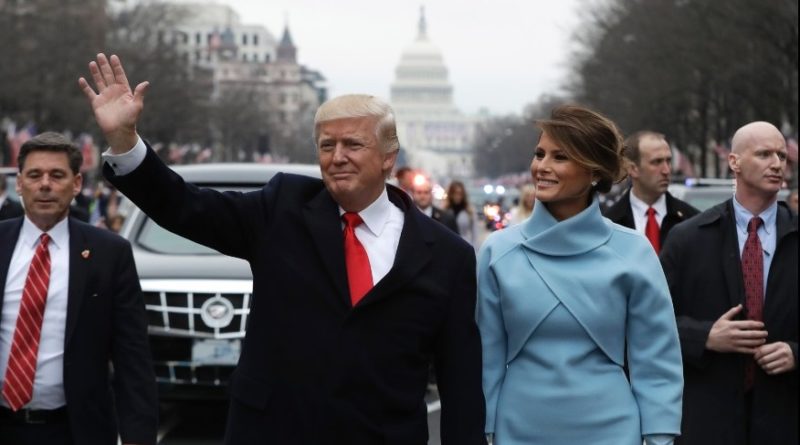 Washington (CNN) – Donald Trump became the 45th President of the United States on Friday, vowing to drain power from Washington elites and always put “America first” in its dealings with the world at a moment of transformative political change.

He arrived at the White House for the first time as President just before 5 p.m. ET following a day of tradition marking the power shift in the nation’s capital.

In a time-honored ceremony on the flag-draped West Front of the Capitol earlier in the afternoon, Trump placed his left hand on a family Bible and another that belonged to Abraham Lincoln and promised to preserve, protect and defend the Constitution. As light rain began to fall on a crowd stretching toward the Washington Monument, Trump took the oath of office from Chief Justice John Roberts with the new first lady, Melania, by his side. Trump’s inaugural address centered on the themes that animated his stunning outsider campaign, which shattered political conventions and gave voice to heartland voters who felt badly let down by professional politicians.

Though he paid tribute to outgoing President Barack Obama, the President sketched a vision of America that came across as a repudiation of the last administration. He promised to restore the nation’s strength and purpose and to rebuild it from within, vowing to “bring back” American jobs, borders, wealth and dreams.

Trump: ‘You will never be ignored again’

Trump talked of a nation of mothers and children trapped in poverty in the inner cities and “rusted-out factories scattered like tombstones,” and warned crime and gangs had robbed the nation of much of its potential.

“A new national pride will stir our souls, lift our sights and heal our divisions,” Trump said, emphasizing that whether people are black or white they still bleed the same red blood of patriots.

And he told Americans listening to the address: “You will never be ignored again.” Former Presidents George W. Bush, Bill Clinton and Jimmy Carter attended the ceremony. Hillary Clinton, whom Trump defeated in the November election, was in the audience in a show of support for national unity and the peaceful transfer of presidential authority.

But, contrary to some expectations, Trump made no gesture of reconciliation toward Clinton or her supporters following the deeply divisive campaign in which he won the Electoral College but lost the popular vote. He later recognized her during a congressional lunch, when she received a standing ovation.

“I was very honored, very, very honored when I heard that President Bill Clinton and Secretary Hillary Clinton was coming today, I think it is appropriate to say it,” Trump said. “Honestly, there is nothing more I can say because I have a lot of respect for those two people.”

The swearing-in was one of many traditions that began Friday morning. Trump and his family attended a private worship service at St. John’s Episcopal Church, known as the church of presidents. The Obamas greeted Trump and the new first lady at the North Portico of the White House before hosting them for tea.

Earlier in the morning, Obama wrote a letter to Trump and left it on the Resolute desk in the Oval Office, as outgoing presidents typically do for their successors. As Obama left the Oval Office for the final time, he was asked whether he had any words for the American people. “Thank you,” Obama responded.

The customs and symbolism that are playing out — from Trump’s ride to the Capitol with Obama to the first couple’s dance at an inaugural ball — are familiar. But the circumstances of this inauguration — the 58th in the nation’s history — could hardly be more unconventional.

When the presidential primary season began nearly a year ago, few thought Trump could survive the battle for the Republican nomination — much less beat Clinton to win the presidency. He was the oldest president sworn in for a first term and the first president with no previous diplomatic, political or military executive experience.

In what is always a poignant moment, the former President Obama and his wife left Capitol Hill on a helicopter bound for Joint Base Andrews for a farewell ceremony before taking one last flight on the presidential jet. The Obamas are heading to Palm Springs, California, for a vacation.

Trump attended a joint congressional inaugural luncheon in the Capitol before heading back to the White House for the inaugural parade. Halfway along Pennsylvania Avenue, Trump’s vehicle stopped and the new first couple walked hand in hand past the cheering crowds. By the time the motorcade approached the new Trump hotel, the President was back in the hulking car.

In the evening, Trump and the new first lady will attend two inaugural balls, part of the stripped-down inaugural festivities that aides say are meant to stress that the new president is eager to get to work.

Trump’s supporters, who sent him to Washington to rip up political norms and thwart the establishment, are thrilled as he assumes power. The crowds started streaming toward the National Mall as dawn broke, with many people wearing Trump’s distinctive red “Make America Great Again” baseball caps.

Day One: Trump says he will sign ‘very meaningful’ documents amid talk of executive orders

But millions of Americans are also anxious, owing to the abrasive tone of Trump’s campaign and fears over the consequences of his strongman leadership style.

Trump has vowed to tear up US trade deals that he says disadvantage US workers, confront a rising China and improve estranged relations with Russia, despite allegations that Moscow interfered in the election. He has set high expectations for his presidency by promising to return jobs to US shores and reviving the manufacturing industry. He has pledged to crush ISIS and introduce tough new vetting on immigrants from countries where there is terrorist activity, raising fears of discrimination against Muslims.

Trump is promising to build a wall on the southern border, to crack down on undocumented migrants and to gut the financial and environmental regulations that are at the center of the Obama administration’s legacy.

New presidents typically use the inaugural address — viewed by a huge crowd fanned out on the National Mall and millions of television viewers — to issue a call for national unity and ease the wounds of divisive elections. They typically remind Americans of the values and the history that binds them and of the nation’s historic mission.

Trump, so far, has done little to reach out to his foes since November.

“He is still talking as if he is the insurgent candidate rather than the President-elect,” said Robert Rowland, an expert on presidential rhetoric at the University of Kansas. “Historically, presidents who are effective use inaugural addresses to heal the wounds of the campaign, to talk about what it means to be an American, to discuss shared values and lay out their political principles to come across as a strong not vain leader.”

Below: Spectators watch from rooftops as President Donald Trump and first lady Melania Trump walk in the inaugural parade on Friday, January 20, in Washington. Photo: CNN