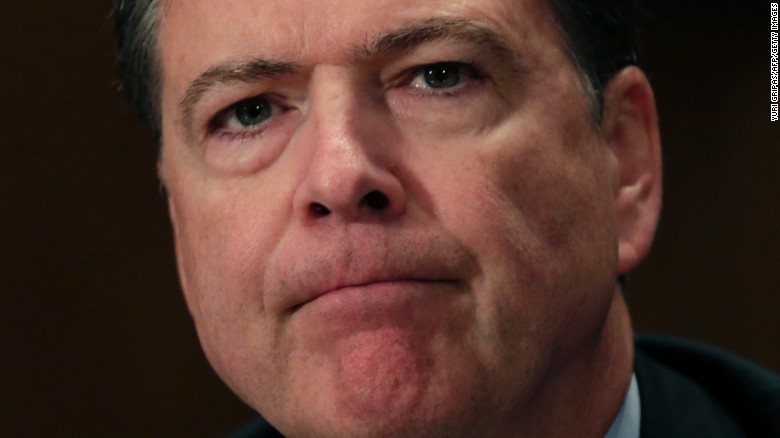 (CNN) Washington – US President Donald Trump yesterday (May 9) fired FBI Director James Comey, sweeping away the man who is responsible for the bureau’s investigation into whether members of his campaign team colluded with Russia in its interference in last year’s election.

The bombshell announcement that sent shock and surprise ricocheting through Washington ends the career of the man who was once seen as the unimpeachable and nonpartisan ideal of how a law enforcement officer should behave. But Comey saw his reputation tarnished when he was dragged into the toxic politics of the 2016 campaign.

The Trump administration attributed Comey’s dismissal to his handling of the investigation into Democratic nominee Hillary Clinton’s email server, but Democrats ridiculed that notion, raising parallels to Watergate-era firings and suggested Comey was getting too close to the White House with the Russia probe.

In any case, senior White House officials appeared to have badly misjudged the impact of Trump’s sudden move. A source with knowledge of discussions inside the White House told CNN’s Dana Bash that the thinking was that because Democrats were saying precisely what Deputy Attorney General Rod Rosenstein said in a letter explaining the grounds for Comey’s dismissal there would be no backlash.

What was not thought through apparently was an explanation of why Comey was fired now, at a time when critics would immediately conclude it was because of the Russia probe.

In recent days, Comey again came under fire for his handling of the investigation into Clinton’s private email server. Many Democrats believe that his announcement that he was re-opening the probe 11 days before the election cost the former secretary of state the presidency.

Comey learned of his dismissal from televisions tuned to the news, as he was addressing the workforce at the FBI office in Los Angeles, law enforcement sources said. The source said he made a joke about it to lighten the mood and called his office to get confirmation.

In a signed letter released by the White House, Trump informed Comey that he was “hereby terminated and removed from office, effective immediately,” explaining that he reached the conclusion that Comey is “not able to effectively lead the bureau.”

“It is essential that we find new leadership for the FBI that restores public trust and confidence in its vital law enforcement mission,” Trump told Comey in the letter. “I wish you the best of luck in your future endeavors.”

White House press secretary Sean Spicer, sandwiched in the dark between a gaggle of reporters and a large shrub on the White House driveway, described Trump’s decision as arriving only after a long memo from the deputy attorney general, which Spicer said was delivered on Tuesday, detailing Comey’s shortcomings on investigating Clinton’s emails.

But multiple White House officials said Trump had been considering firing Comey for at least a week before he made Tuesday’s decision. Indeed, Trump revealed his anger in a string of late-night messages on Twitter on May 2, exactly a week before his final decision was made public.

At the center of Rosenstein’s rationale for recommending Comey’s firing was the director’s handling of the investigation into Clinton’s private server, namely his decision to recommend no charges be filed and the news conference he held to explain his reasoning.

Rosenstein accused Comey of attempting to “usurp the attorney general’s authority” by publicly announcing why he felt the case should be closed without prosecution.

“Compounding the error, the director ignored another longstanding principle: We do not hold press conferences to release derogatory information about the subject of a declined criminal investigation,” Rosenstein argued in his memo.

“We should reject the departure and return to the traditions (of the bureau),” Rosenstein said. “The way the director handled the conclusion of the email investigation was wrong. As a result, the FBI is unlikely to regain public and congressional trust until it has a director who understands the gravity of the mistakes and pledges never to repeat them.”

But Senate Minority Leader Chuck Schumer said he told Trump on the telephone that he had made a terrible mistake.

“Were these investigations getting too close to home for the President?” Schumer asked

And in a sign of possible trouble for the administration, Republican Sen. Richard Burr, who is leading a Senate intelligence committee probe into alleged Russian influence on the election, expressed disquiet at the firing of Comey, which he described as a “loss for the bureau and the nation.”

“I am troubled by the timing and reasoning of Director Comey’s termination. I have found Director Comey to be a public servant of the highest order, and his dismissal further confuses an already difficult investigation by the Committee,” Burr said.

As Democrats renewed their demands for a special counsel, arguing that the Trump Justice Department could not be trusted to oversee the case, Republicans insisted that one was not needed.

“I think Rod Rosenstein, the new deputy attorney general is competent to lead that effort,” said Texas Sen. John Cornyn, a member of the GOP leadership.

But Republican Senate Foreign Relations Committee Chairman Bob Corker of Tennessee said that though Rosenstein’s rationale for removing Comey was sound, it, would “raise questions.”

Sen. John McCain added: “While the President has the legal authority to remove the director of the FBI, I am disappointed in the President’s decision to remove James Comey from office.”

The Arizona senator renewed his request for a special congressional committee to review the Russia allegations.

CNN’s senior legal analyst Jeffrey Toobin, was not buying the idea that Comey was sacked over the Clinton investigation, saying it was “absurd.”

Toobin branded the move a “grotesque abuse of power by the President of the United States.”

“This is not something that is within the American political tradition,” Toobin said, comparing the sacking of Comey to President Richard Nixon’s firing of special prosecutor Archibald Cox during the Watergate scandal.

“This is not normal. This is not politics as usual,” Toobin, though he added that Trump did have the legal authority to fire an FBI director.

The White House, however, said that the impetus for the firing of Comey came from Rosenstein, noting that he was a career prosecutor who served under President Barack Obama as the US Attorney for Maryland, and was confirmed in his new job on April 25.

A senior administration official said that Rosenstein assessed the situation upon taking office and concluded the FBI director had lost his confidence. He sent his recommendation to Sessions – who has recused himself from the Russia investigation since he was a Trump adviser and campaign surrogate — who forwarded it to Trump, who accepted it on Tuesday.

Former Clinton campaign officials accused Trump of using the furor over Comey’s handling of the email server as a ruse to get out from under the Russia investigation.

“I was as frustrated, concerned and disappointed as anyone with Director Comey’s handling of the email investigation, but President Trump just fired the man investigating how Russia meddled in our election and whether members of his campaign were involved, an investigation President Trump called “charade” only 24 hours ago,” said Clinton’s former campaign manager Robby Mook.

“It’s equally concerning that our attorney general, who lied about his own meetings with the Russians, approved Director Comey’s firing,” he said.

One Trump loyalist, who worked on the campaign and the transition gave his reaction to CNN’s Jim Scuitto.

“I firmly believe the Russia angle is fake news. But this gives me pause,” the person said.

Senior Justice Department and FBI officials say they were unaware of the Comey decision until the announcement. Officials who spoke to CNN said they are shocked by the development.

Comey’s term was due to run until 2023. The decade-long tenure was introduced to shield FBI directors from being drawn into politics, but the position is still subject to dismissal at the pleasure of the President.

Comey’s last appearance on Capitol Hill last week exacerbated doubts about his position. Just before news of his dismissal broke, his office issued a statement aiming to clear up his testimony that former Clinton aide Huma Abedin “forwarded hundreds and thousands” of emails to her husband’s laptop.

The note, signed by Gregory Brower, assistant director of the FBI’s Office of Congressional Affairs, clarified that the “hundreds and thousands of emails” that Comey said were ‘forwarded” from Abedin to her husband’s email “included emails transferred via backups as well as manual forwarding.”

The White House said it will immediately launch the search for a new FBI director. Deputy Director Andrew McCabe is now the acting FBI director, according to a message sent to employees by Sessions.

Comey was appointed FBI director by President Barack Obama in 2013.

In so doing, he elevated a Republican law enforcement veteran who had been critical of the Justice Department under former President George W. Bush to the top domestic investigative and surveillance organization, among the most powerful posts in the world.

In the decades since former FBI Director J. Edgar Hoover, the controversial director who brought FBI into the modern era, law enforcement has avoided the appearance of influencing politics the way Hoover did.

But Comey’s decision to thrust himself repeatedly into the 2016 election, put him at odds with the FBI’s general decision to stay away from the political spotlight.

Comey made the decision in July to go public with his recommendation that the Justice Department not pursue any charges against Clinton or her former staffers over her email practices as secretary of state. However, he also took the opportunity to rebuke Clinton at length as being “extremely careless” with sensitive information.

Then-candidate Trump had talked up the investigation until this point, at which time he and his campaign derided Comey for the “political” decision.

Just days away from the election, Comey jumped into the race again. He informed Congress, via letter, that the FBI had re-opened its investigation into Clinton. The decision was made because of its investigation into former Rep. Anthony Weiner, who is married to Clinton confidant Huma Abedin. Comey followed up days later with another letter, informing Congress that the FBI didn’t find anything and continued to believe Clinton’s practices did not merit the pursuance of any criminal charges.

After Clinton’s loss, former President Bill Clinton blamed Comey for it, as have many Clinton staffers, at least in part.

Last week, Hillary Clinton herself told CNN’s Christiane Amanpour: “I was on the way to winning until a combination of Jim Comey’s letter on October 28 and Russian WikiLeaks raised doubts in the minds of people who were inclined to vote for me and got scared off.”

After taking office, Trump met with Comey at the White House.

He offered a cryptic remark to the FBI chief.

Top: FBI Director James Comey testifies during a Senate Committee on Homeland Security and Government Affairs hearing on “Fifteen Years After 9/11: Threats to the Homeland,” on Capitol Hill in Washington, DC on September 27, 2016.  Photo: YURI GRIPAS/AFP/Getty Images via CNN 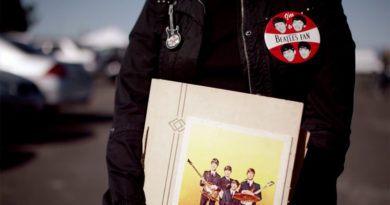 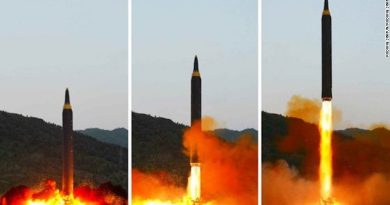 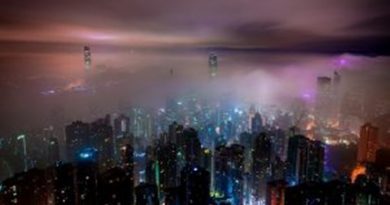