A ten-wheeled truck suddenly cut in front of a bus that caused an accident with another bus, 11 are injured. The Tungmahamek Police were notified of a road accident on 17 November 2019. Bus no.195 crashed into Bus no.205 on Rama 3 Road, Klong Toey, Bangkok.

The police went to the location of the accident with the emergency rescue team. Bus no.195 front had been smashed in from the left side with a broken windshield. 11 Passengers were injured from the accident, 4 was delivered to the Charoen Krung Hospital, 4 to the Chulalongkorn Hospital, and 3 to the Kluay Nam Thai Hospital.

Pramun Srilakorn 51 years old the driver of bus no.205 stated that he was driving on the left lane and bus no.195 was driving right behind him all along the way. When they arrived at a construction site on the road by the Sunthon Kosa Intersection Overpass suddenly a ten-wheeled truck that was carrying dirt drove out from the construction site and cut in front of his bus. He stepped on the breaks so suddenly that the bus no.195 driver could not stop the bus in time, causing the two buses to crash into each other.

Waruni Pikulkaew 19 years old the bus girl on bus no.195 stated that they were driving behind bus no.205 as usual when a large truck cut in front of bus no.205. The driver tried to stop the bus but they were too close to the bus in the front. The driver yelled to the passengers that the bus won’t break then there was a loud bang and passengers bounced inside the bus. 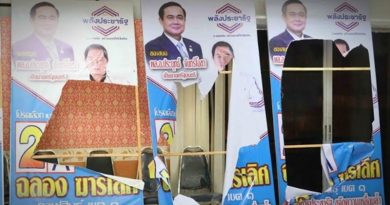 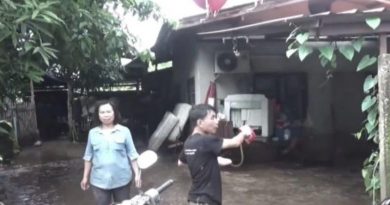