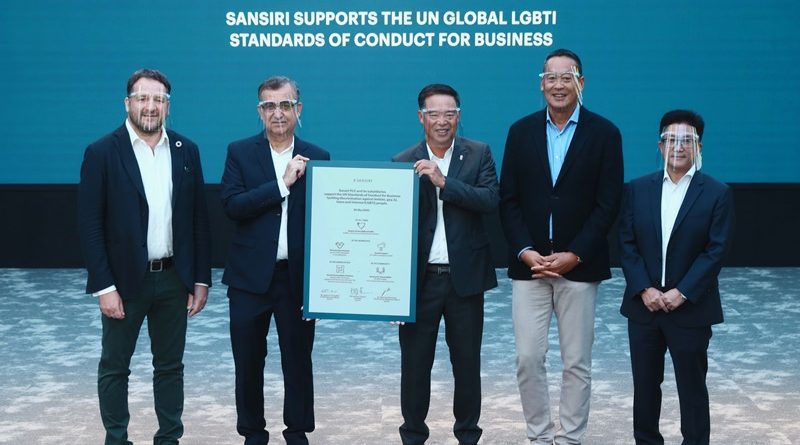 Sansiri steps up support and takes affirmative action for LGBTI rights by eliminating workplace discrimination, kicking off ‘Everyone is Family’, an awareness campaign during Pride month with inspiring art installations, an inclusive corporate culture and home loan privileges in a display of support and solidary with the LGBTI community

Sansiri announced today that it has become the first Thai company to commit to greater LGBTI rights by signing up to the United Nations Global Standards of Conduct for Business to tackle discrimination against lesbian, gay, bisexual, transgender and intersex (LGBTI) people.  Sansiri has a strong determination to build an inclusive company culture in accordance with its core values of equality and diversity. Nowhere is the effect of this policy more apparent than in the Pride month of June, when it is celebrated globally.

Sansiri’s top management from all departments were represented at the ceremony to sign the UN Global LGBTI Standards of Conduct for Business agreement, which took place at Sansiri’s new headquarters, known as Siri Campus, on Sukhumvit Soi 77. 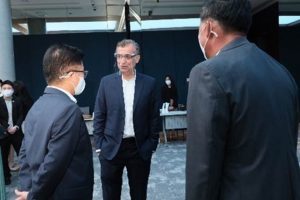 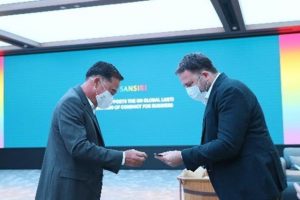 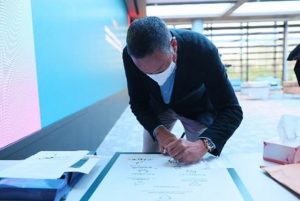 On hand at the commitment signing ceremony from Sansiri were Mr. Apichart Chutrakul (Chief Executive Officer), Mr. Srettha Thavisin (President) and Mr. Wanchak Buranasiri (Chief Finance Officer).  Also in attendance were the Thailand representatives from the Office of the United Nations High Commissioner for Human Rights (OHCHR) – Thailand Team Leader, Mr. Badar Farrukh and from the United Nations Development Programme (UNDP) – Resident Representative, Mr. Renaud Meyer, showing their support for Sansiri’s commitment as well as to encourage other businesses to follow suit.  By adopting the UN Standards, Sansiri is the first company in Thailand to join 200 other global companies which include Microsoft, Google, the Coca-Cola Company, Netflix and Nike; collectively being active agents for positive change.

The UN Standards of Conduct for Business, developed by the Office of the United Nations High Commissioner for Human Rights, promotes five business principles that Sansiri is committed to implement in the workplace, marketplace and community.

“Sansiri is proud to be backing the UN Standards of Conduct. A sound corporate culture should include respect for human rights and eliminating workplace discrimination. We believe in people’s equal rights and opportunities. By adopting a gender diversity and inclusivity policy, Sansiri communicates our messages to all groups of people, and all of them are part of our family. From a recruitment point of view, we have always wanted to have the best people on board at Sansiri. If we don’t take into account different pools of talent and advocate equality and inclusivity, then we are not going to offer the best properties and services to our clients. We need to reach out as much as possible to make Sansiri a truly inclusive organization,” says Mr. Srettha Thavisin, President of Sansiri Plc.

“Gender equality and inclusivity is also a worthwhile business imperative, with studies showing that LGBTI inclusive workplaces perform better financially, do better than companies that do not adopt LGBTI inclusive practices, attract customers who care about equality, and find it easier to attract and retain talent.  Employees, regardless of their sexual orientation or gender identity, express greater job satisfaction at companies where these practices are in place”, said Thavisin.

“At Sansiri, all employees are protected from gender discrimination in the workplace thanks to an ongoing training programs and practices on diversity and inclusion for the company’s employees, managerial staff, including sales staff and on-site personnel. The training introduces equal opportunity and non-discriminatory practices to be applied to all levels of engagements with customers, partners, third-party suppliers, vendors and stakeholders”, said Thavisin. 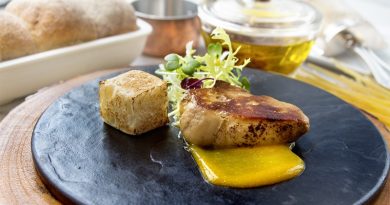 Dine & make a difference at the Sunday Jazzy brunch 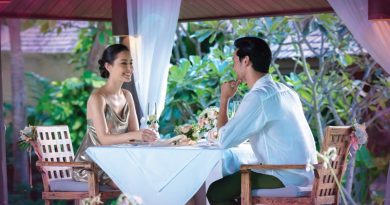