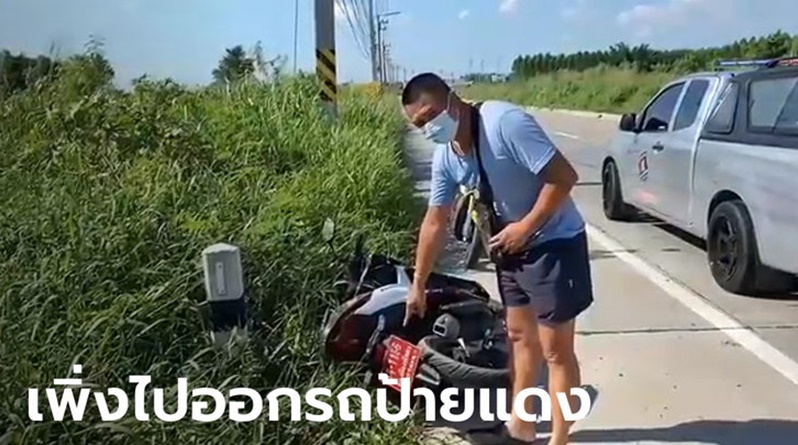 A man died after a motorbike accident; witness believe the wind blew his mask that ended up covering his eyes. The man ended up driving into a utility pole and died shortly after. This story helps remind motorbike drivers to remove the face mask before driving, it is necessary to wear masks while outside during times of Covid-19, but they can also be dangerous when combined with the wind while driving. The Burmese man had just purchased a brand-new motorbike and the accident took place within an hour after the purchase. Locals who witnessed the accident stated a mask was covering his eyes.

The Sanook news Team reported on 23 May 2021 at 17.30 the Ban Bueng District Police received notification of an accident in Nong Sak Sub-district. The accident took place on a curved road and the utility pole was damaged. There was also a 10-meter-long tire mark leading to the accident location. Mew 43-year-old a Burmese man was found on the road with bleeding ears. People who witnessed the accident tried to wake the man up, but it never worked. The local rescue team performed CPR, but Mew died at the site. About 200 meters away from where Mew was found there was a red and white brand-new Honda motorbike.

The seat was still covered in plastic wrap from the shop. It has a red Pattaya license plate, red plates in Thailand are used for new cars while they wait for the permanent license number. Although the motorbike was new, it was crushed after the accident took place. Pricha 42-year-old a good citizen stated he saw the victim laying on the road with a mask over his eyes. He believes wind blew the mask over his eyes. Friends of Mew drove by after the accident and asked the rescue team to see who the victim was. They were shocked to find out it was their co worker at a local factory. They realized he was gone longer than usual and decided go looking for him.

FB Caption: A man went driving on his motorbike with a mask on, this ended up killing him.