Win motorbike drivers strike again as they gang up and attack a Grab bike driver that came to pick up a customer in Sukumvit 48, Bangkok City. A Facebook User named Amittaa Phongsawat shared the incident online. The post shows 3 Win motorbike drivers ganging up on the Grab driver who is wearing a black jacket in the pictures. The Win drivers used a helmet to hit the Grab driver over and over on his head and his body.

Amittaa captioned the post “This happened in front of a condo on Sukumvit 48. I called a grab driver to go to the gym as usual. There were 3 Win drivers who followed the Grab driver. One of them drove in front of Grab’s motorbike and blocked him off. Then they started to attack him and didn’t stop even though it was clear that the Grab driver did not want to fight back or take matters further.

The Grab bike driver went to file a report with the Khlong Tan Police after the attack. All 4 involved in the fight were called in for investigation. Officials have taken the Grab driver to the hospital and the 3 have been charged a fine of 1,000 THB each and another 3,000 THB for the damages. The Grab bike driver was also breaking the law as the motorbike used is not registered as a public vehicle, punishment is a fine not exceeding 1,000 THB or imprisonment not exceeding 1 month, or both. 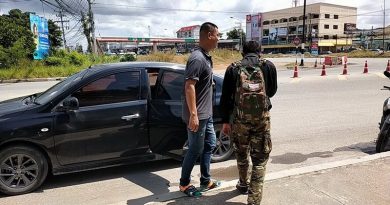 Villager thought he found treasure, turned out to be a bomb.