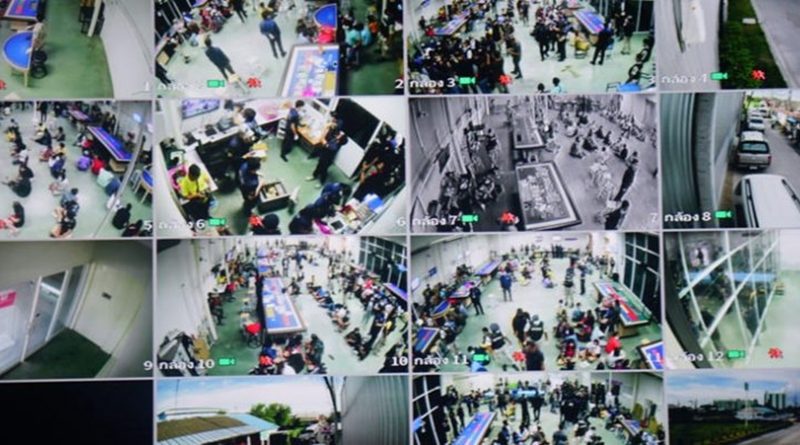 112 gamblers have been arrested at an illegal casino in Rayong Province. The casino has the average cash flow of 12 Million THB per day and is one of the biggest illegal casinos in Rayong. Rayong Administrative officials in cooperation with the Department of Special Investigation (DSI) discovered a large illegal casino in the city of Rayong. Investigation shows that the illegal casino is set up inside a warehouse located near the Map Ta Phut Tesco Lotus and is about 600 square meters. Inside the casino is divided into different zones with both chance-based and skill-based gambling.

Officials arrested a total of 118 gamblers inside the building, out of the number 106 is customers, and 12 are the dealers. Evidence includes a Hilo table along with the equipment, 5 Dragon Tiger Card tables along with the equipment, 2 slot machines, Casino chips worth millions, and 700,000 THB cash. There were also bankbooks in the casino that showed an average cash flow of at least 12 Million THB per day. All suspects were taken to the Rayong CityDistrict Office and will all be prosecuted by the Map Ta Phut Police Station for joining in illegal gambling. They will also be prosecuted for breaking the national emergency decree, the fight against Covid-19. Officials will also work in cooperation with the Anti Money Laundering Office (AMLO) on cases relating to the money laundering law of Thailand.

Ronarong Thipsiri from the Governing Officer’s Law Enforcement Operation Center stated that this illegal casino is known as the RJ casino to locals in the area. RJ is a big illegal casino located in the middle of a busy area in Rayong Province. The casino operates in public without fear of the law. There are van services to pick up gamblers from Pattaya and other areas. The owner is the same group that used to own a big illegal casino in Ubon Ratchathani Province, the specific casino is now shut down. Officials also revealed that they are working hard to shut down more illegal casinos and arrest gamblers all over Thailand, especially when the world is in a battle against Covid-19.

FB Caption: The illegal casino has at least 12 Million THB of circulating funds per day.