There has been an ammonia leak at a local Ice Factory in Khao Kho, Phetchabun Province. Khao Kho Police received notification of the chemical leak. The local Ruam Katanyu Rescue Team along with related officials were notified to inspect the area. The Khao Kho Head Chief Phum Phumee also went to help evacuate locals in the area. Officials arrived and found a large ammonia storage tank used in the ice-making process. Members of the rescue team in safety suits went inside to inspect the tank, turns out the tank valve was stuck, and couldn’t be closed. Members sprayed water to suppress the ammonia gas.

Officials from the Phetchabun Department of Disaster Prevention and Mitigation inspected the conditions and advised it is best to seal off the area in a 1-kilometer radius and to evacuate locals in the area. The head chief then ordered police to close the roads near the factory. Krit Kongmuang the Governor of Phetchabun Province has now announced at 18.00 on 7 October 2020 for over 200 locals to evacuate to Wat Camp Son Temple or to relative’s homes until it is safe to return. An employee at the ice factory has been injured in the incident and is now at the hospital.

A member of the rescue was also injured as he wore an oxygen tank while spraying water in the factory. The oxygen ran out and he breathed in the ammonia. The member lost consciousness and is now at the Khao Kho Hospital. Officers are still working to this moment spraying water in and nearby the ice factory. Ammonia is still leaking out of the tank and the valve cannot be repaired. The United States Department of Labor published on their website stating that Ammonia is a high health hazard corrosive to the skin, eyes, and lungs. Exposure is dangerous to health and can be life-threatening. A similar incident took place at an ice factory in Phang Nga during August 2018, the owner died.

FB Caption: A member of the rescue team lost consciousness after accidentally breathing in the ammonia.

10 Provinces with curfews and ban on gatherings. 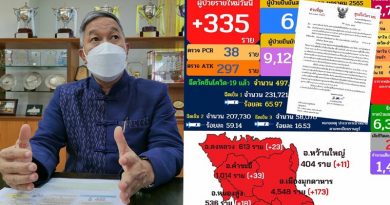