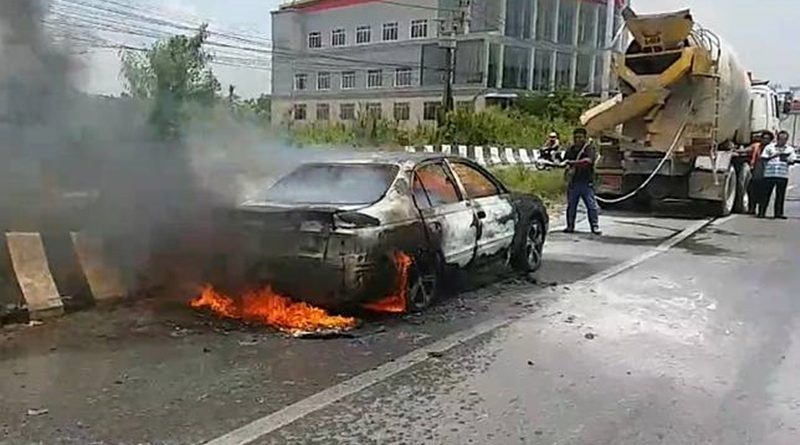 A married couple purchased a used car for 22,000 THB, not long after leaving the car went up in flames. The couple ran for their lives when the fire started, this story is a good reminder to always double-check before purchasing a used vehicle even if the price is right. The Pak Kret Police in Nonthaburi Province received notification at 12.30 on 21 May 2020 about a car on fire on road 345 near the Pak Kret 2 Hospital. The local fire rescue team were notified before rushing to the incident.

Officials found a Green Toyota Corona with a Roi Et Province license plate parked on the road. The car was in flames that kept on growing. Good citizens including 2 cement truck drivers happened to drive by when the fire started inside the car. They stopped and helped find water to calm down the fire. The firefighters arrived and together the team was able to control the fire after 30 minutes.

Nilnet and Chayutpong the husband and wife stated they had just purchased the car not long before it turned into flames. The car was purchased from a second-hand car tent in Pak Kret not far from where the car was now sitting on the road. The vehicle was purchased for 22,000 THB. The couple was planning to drive the car back home in Kanchanaburi province. They bought the car and had just left the car tent. Suddenly while on the road smoke started to rise out of the engine. The couple quickly stopped the car and ran away with the fear of it blowing up. They made the right decision as it quickly turned into flames.

It is still unknown to what caused the fire. The car has not been converted to run on natural gas and it also has no insurance. Officials invited the couple in to file a report at the Pak Kret Police Station. The car has been sent in for investigation to find the cause of the incident and the couple is planning to take action against the seller for damages.

FB Caption: The couple had just purchased the car for 22,000 THB, as they started driving smoke started coming out. 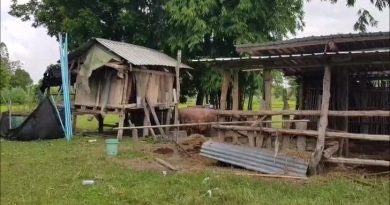 Man survives after struck by lighting, woke up from mother’s call. 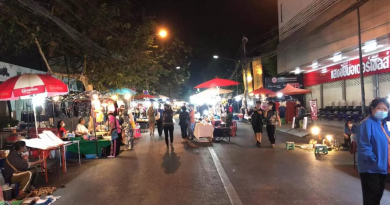