The Khon Kaen Police arrested an electrician with the side job of being a cable thief along with a pile of evidence including Yaba pills. Police Colonel Pricha Kengsarikij from the Khon Kaen Police Station and other related officials reported the arrest of Somchit 44 years old, a local from the Province. The suspect had stolen cables that belonged to TOT Public Company, a telecommunications company. The theft took place at an electricity post on the Mittraphap Road in Khon Kaen City.

Officials reported that the TOT company notified them of a thief that was stealing their cables in real-time A police officer was sent to the location where he witnessed Somchit in the action of cutting down cables from the electricity post. The official revealed himself and called Somchit down from the post. The suspect was searched and officials discovered 5 cable sections, a large cable cutter, 3 medium cable cutters, a small cable cutter, 3 pairs of scissors, a knife, a backpack, and a safety belt that was used to climb the electrical post. They also found a Honda Wave 110 Motorbike with no license plate parked in a forest near the road.

Officials searched the motorbike and found Somchit’s phone and something that wasn’t expected to be found in the case, a small ziplock bag with 14 Yaba pills. The suspect admitted that he has previously committed 2 similar crimes in December of 2019 where he got away. At the time he managed to get 7 – 8 kilograms of cable. He burned the cables until only the copper was left before selling it to a buyer at the market for about 100 THB per kilogram. His electrician skills allow him to professionally cut the cables. The money was to be used for purchasing drugs and when he runs out of cash this is what he usually turns to. Somchit also revealed that he will take some drugs before he steals the cables every time.

FB Caption: Officials arrested an electrician with the side job of being a cable thief along with a pile of evidence including Yaba pills. 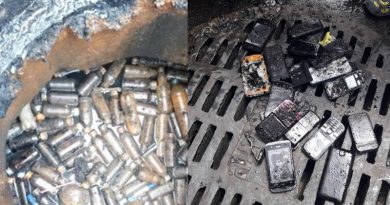 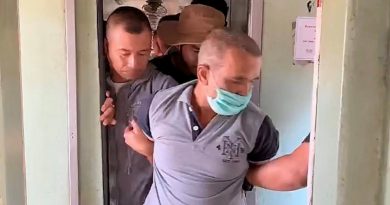