The dating world today is rough and it is very hard finding someone in real life. Most matchmaking starts online and if you are lucky the relationship continues. A woman joined the online dating community and matched with a man. She went on a date that turned into hell after the man stole her phone and left her alone with a heavy food bill. In the end she was left with 100 THB and the restaurant understood her situation before cancelling the bill. A Facebook user named “Phimdalin Teerapattranit” shared the incident online on 6 May 2022. There was a couple who came into a restaurant and ordered as usual. When the bill arrived the man was no where to be found and the woman was crying alone.

The post stated “A story from a bar, last night a couple came in at 22.30. Everything seemed normal until 23.30 when they ordered a big order to take home. Just the food alone cost 1,500 THB. The business believed they were going to eat more at home and didn’t suspect anything. When it was time to pay the woman was standing and crying. She had 100 THB so the business took back the food and asked her what happened. The woman revealed she had just matched with the man on an application on the same day. The man picked her up and while they were eating he asked her to transfer money to his sister as his phone ran out of battery.

The woman believed him and transferred 2,000 THB from her phone. The man then ordered a lot of food to take home. The woman stated she didn’t have any money but he insisted and told her to order whatever she wanted. He then asked to borrow her phone to call someone and walked away. He even started a conversation with a police officer who was in front of the bar. The restaurant helped the woman by showing the security footage and took her to file a report with the police. The victim has no information of the man at all, not even his real name, license plate number, she couldn’t even remember her own phone number, there is no information to help the investigation.

FB Caption: The woman also transferred money to a bank account as the man claimed his phone ran out of battery. He ordered a lot of food then asked to borrow her phone and disappeared.

Rapist caught after 7 yrs in monkhood 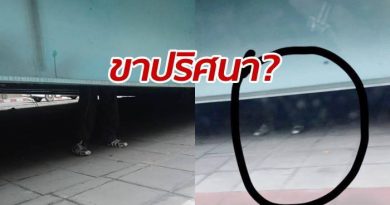