Police Major General Surapong Chaijan from the Immigration Police states that the biometrics system helps lift the nation’s immigration office to an international level, Pol.Lt.Gen Surachet should not bring in the biometrics system into his own personal conflicts. Officials from other government sectors have evaluated whether the biometrics system really works. Confirmations show that the system is efficient. Ever since he became the immigration police chief over a period of 6 months there have been 48 million people entering and leaving the nation. 4,353 arrests have been made to persons on the blacklist, 126,989 persons have been found to have overstayed in Thailand while 3,166 has been arrested with a total fine of over 240 Million THB. The project is transparent and can be verified at every process.

Police Major General Chuchat Tharichat from the Immigration Police showed the media immigration officials working at the Don Mueang International Airport in Bangkok. The Biometrics system is used to scan visitors entering and leaving Thailand with accuracy at a secure standard. The system has helped officials work more quickly with efficiency because the database is highly detailed. The biometrics system has helped arrest persons wanted by the Interpol and persons on the Blacklist. There are over 1,300 biometric devices across Thailand at international airports and borders.

FB Caption:  The biometrics system is used internationally and has helped arrest many international criminals 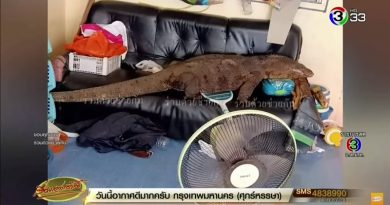