A man was driving as usual when 20 elephants cut in front of his vehicle in Chonburi Province. The man stated that the elephants ran out of a forest by the road and cut right in front of his truck, he couldn’t stop the car in time causing the clash. The elephants continued running into the forest and disappeared. Kittipong Kittikul the Bo Thong village chief, officials from the 5 Provinces Forest, Officials from the Khao Ang Rue Nai Wildlife Sanctuary, and related officials went to visit Sompong Duangknam 34 year old at his home in Ban Bueng District, Chonburi Province, on 19 October 2020.

Sompong stated at around 9 pm on the 18th he was driving a white Isuzu truck in Chonburi on a road heading to Ban Ang Kraden. Suddenly a herd of wild elephants cut in front of his car with less than 1-meter space. Sompong couldn’t stop the car in time and ran into an elephant. The elephant didn’t stop and continued to follow the herd into the forest. The truck is damaged and the passenger is injured. Sarocha Saejia 20-year-old is the passenger in the truck sitting with Sompong in the incident.

Kittipong stated he was notified that a villager drove into a wild elephant. The report also stated there is 1 injured person and a damaged truck. The village chief visited Sompong to make sure that he is safe. Kittipong informed the villager that there are a lot of wild elephants in Bo Thong during this time. The related authorities have been notified and they will send officers to help control the elephants as protection. Wild elephants often damage villager’s farms and also are a risk to road accidents as in this incident. Kittipong gifted Sompong cash and goods. Officials are tracking elephant footprints in the area to find the injured elephant so it can receive medical care.

FB Caption: A herd of elephants cut in front of Sompong’s truck before running away into the forest. 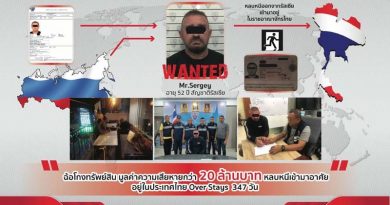 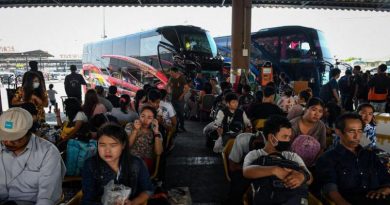 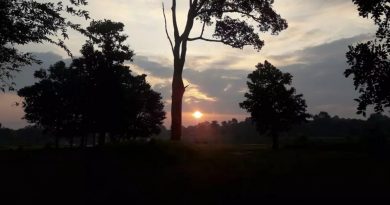