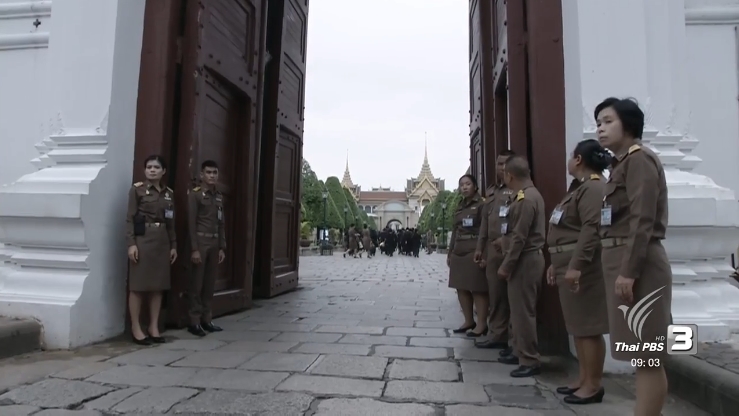 AT 5.15 a.m. this morning the Privy Council Chambers allowed the first group of mourners to line up and pay tribute to beloved His Majesty King Bhumibol Adulyadej in front of the Royal urn, Thai News Agency said.

The first group consisted of people remaining from yesterday and who had slept over at Sanam Luang park overnight and who stayed put even though it rained heavily last night.

While queue numbers were again handed out before dawn today, the difference is that a scanner is being used at the demarcated entrance. Officials are allowing small groups of around a hundred people to enter at one time with there being four such groups lined up and waiting their turn to go in and pay their last respects to the remains of His Majesty the late King  in front of the Royal urn at around 5.15 a.m.

Today the official and volunteer unit in charge of helping the public was able to arrange the queues in a more orderly manner than yesterday. There is a resting point and the tail end of the queue before today’s dawn  was outside the National Museum after going around Sanam Luang park with there not being people waiting within the park like yesterday because this had led to a confusion as to whose turn it was to enter the Grand Palace’s Dusit Maha Prasat Throne Hall.

Thai News Agency reporters talked to a few people waiting to enter the Grand Palace and one of them, Mrs Uraiwan Padtachan, said that she came from Samut Prakarn and waited overnight because she was unable to enter by 9 p.m. last night.  While it rained heavily last night she stayed put even though she had left home at 5 a.m. yesterday and reached Sanam Luang at 10 a.m.

A group of about 10 people from Surat Thani also reached Sanam Luang at 5 a.m. but likewise were not allowed in by 9 p.m. so sat there waiting overnight.

Top: Officials guard the entrance to the Grand Palace after a group of mourners entered to pay their last respects to beloved His Majesty King Bhumibol Adulyadej yesterday. Photo: Thai PBS 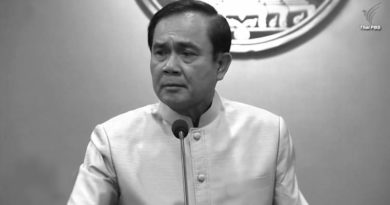 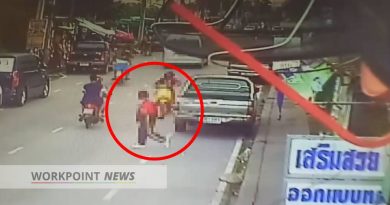