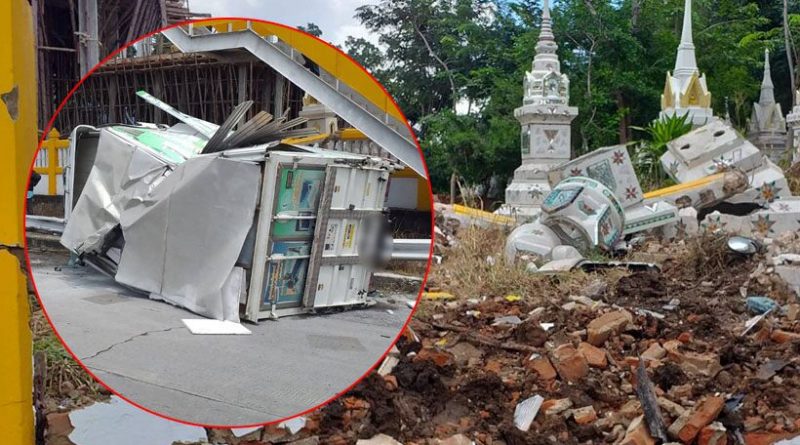 A truck driver lost control of the vehicle and ran into a temple. It was raining and the roads were slippery. The local rescue team in Nakhon Ratchasima Province received notification of an accident on Mittraphap Road. A vehicle had crashed into Ma Klue Mai Temple with 3 injured persons. Rescue team members headed to the location immediately. The team found a White Isuzu truck with a Bangkok license plate. The truck ran into the temple gate before flipping over and ended up under a bridge. The 3 injured persons were inside the truck. A health official passed by the accident and stopped to help.

The officer helped 2 of the accident victims who had open wounds. They are now safe and are on the way to a full recovery. The driver on the other hand is critically injured with a broken leg. The rescue team gave first aid care before delivering him to the Sung Noen Hospital. Villagers in the area who witnessed the accident stated they saw the truck driving behind a bus. Then the truck tried to drive in front of the bus but lost control. The truck started spinning around and crashed into a temple, the truck is almost unrecognizable. One of the injured persons stated they are a solar cell company who were travelling from Samut Prakan Province. The truck was full of equipment and was on the way to many provinces. But before they could finish the job it started raining and then the incident happened.

The road was very slippery and the driver could not keep control of the truck. The Sung Noen Police received notification and went to inspect the accident location. The driver and witnesses will be invited in for investigation. Many areas of the temple have been damaged. A part of the temple gate is crushed and investigation will help reveal what or who is responsible for the accident. Part of the public road is also damaged. The driver is receiving medical care and will be taken care of at the hospital until he is safe to return home.

FB Caption: It was raining and the road was slippery, this caused the driver to lose control of the truck.

Nightclub owner and security beat up woman on Khaosan Road.