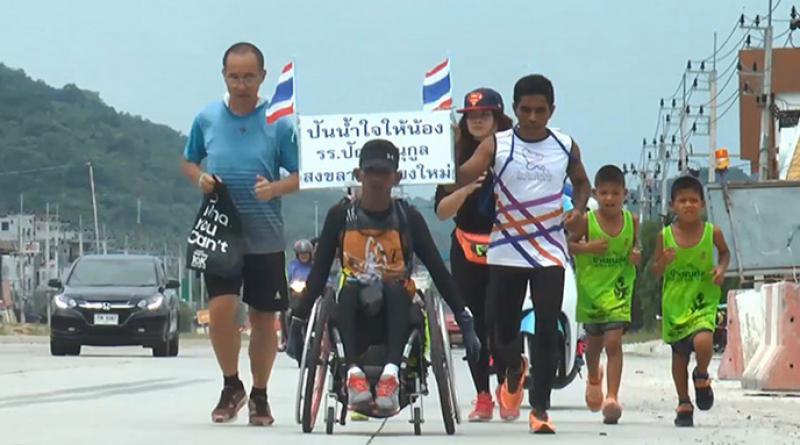 A DISABLED Phitsanulok man rode his wheelchair with bare hands off along the Songkhla – Chiang Mai 1,400 kilometers route trip to raise funds for disabled children in all 48 Panyanukul schools nationwide, Sanook.com reported.

It is to be done with obviously his both hands pushing the wheels right from southern Songkhla province to Chiang Mai up in the north as the destination, or simply put: from South to North, covering the length of 1,400 kilometers.

He aims to promote awareness among the public and raise donations from anyone who wishes to help the disabled children under the care of Panyanukul schools which are specialized schools for the disabled.

Loong Mhee started his journey on his trussed wheelchair yesterday (June 9) accompanied by his fellow joggers/runners from the Chira Nakhon Stadium in Hat Yai district of Songkhla province, amidst the group were people who learned of the news and showed up to see him off, with donations too starting to flow in along the way.

Loong Mhee or Mr.Satit said that he is well aware of possible obstacles and difficulties facing him as a disabled person, not to mention the 1,400 kilometers length, but his spirit is high and his mind is more than 100% ready.

He will try to achieve, with his bare hands, the distance of 40 kilometers per day in all 18 destination provinces. He figures it should take around 40 days to get to Chiang Mai.

This journey should be similar to all his previous ones during which he would try not to bother too many people. He would try to sleep anywhere after the sun goes down.

He has prepared clothes, tents and personal equipments needed to stay overnight.

He could sleep in temples or schools if permitted. For tonight, he would sleep in Singhanakhon district, Songkhla province.

Loong Mhee also said that anyone who wishes to help donate can do so directly to him when he rides pass.

Mr Satit, who regularly participates in social activities including Bike for Mom and Bike for Dad, has traveled throughout the country for the past 3 years and joined both short and marathon walking and running events.

He has becoming quite a public figure and has inspired so many people with disabilities.

He also rode his wheelchair with his hands to help raise money for 9 Phitsanulok hospitals last January. 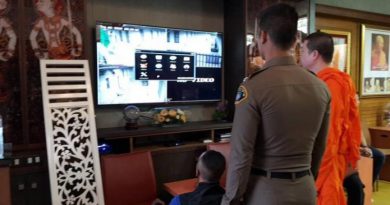 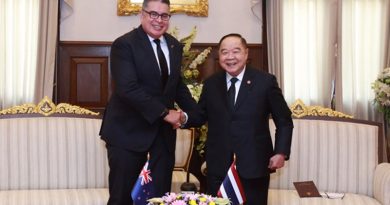